Who Is on the Dime?

The current dime features President Franklin D. Roosevelt. His portrait has been on the obverse side of the dime for many years. Roosevelt first appeared on the ten-cent coin in 1946 when the Roosevelt Dime debuted. 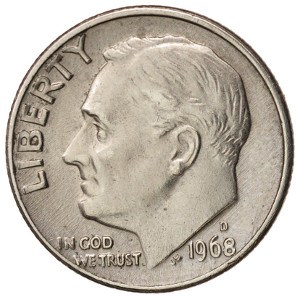 Franklin D. Roosevelt, also known by his initials FDR, was the 32nd president of the United States. Born in New York in 1882, he is the only president to serve more than two terms. FDR served as president from 1933-1945. He is best known for enacting the New Deal. During his presidency he led America through the Great Depression and World War II.

Before the Roosevelt dime there were other dime series such as the Draped Bust dime, Capped Bust dime, Seated Liberty dime, Barber dime, and Mercury dime. These early coins feature Lady Liberty on the obverse side of the coins. The Lady Liberty image represents freedom.