The standard 1999 Pennsylvania state quarters are made of a clad composition that contains copper and nickel. Clad proof quarters and silver proof quarters were also minted and they sell for more money. Keep reading to learn more about these coins. 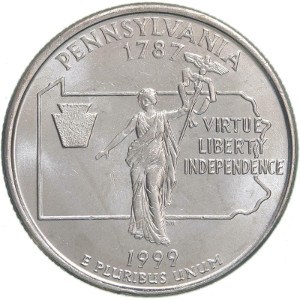 On the reverse side of the coin there are several different images which include the Commonwealth statue, a keystone, and an outline of the state. The Commonwealth statue is the most prominent image and this statue sits atop the state's capital dome in Harrisburg. This statue has been in place since 1905 and it symbolizes kindness and justice.

The year 1787 is inscribed on the coin because this was the year that Pennsylvania officially joined the union.

The standard 1999 Pennsylvania clad quarters in circulated condition are only worth their face value of $0.25. These coins only sell for a premium in the higher condition grades.

The 1999 S proof Pennsylvania quarter is worth around $7 in PR 65 condition.

This coin is worth at least its weight in silver. The silver melt value for this coin is $4.48 as of January 17, 2021. This melt value is calculated from the current silver spot price of $24.79 per ounce.

The 1999 S silver proof Pennsylvania quarter is worth around $25 in PR 65 condition.