The standard 1999 New Jersey state quarters are made of a clad composition that contains copper and nickel. Clad proof quarters and silver proof quarters were also minted and they sell for more money. Keep reading to learn more about these coins. 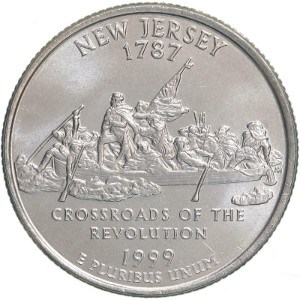 On the reverse side of the coin there is a design that was based on the 1851 painting "Washington Crossing the Delaware". On this design you can see George Washington and his troops crossing the Delaware river on Christmas night 1776. General George Washington and his troops crossed the river in order to make a surprise attack on the British. Their plan worked and the Continental Army was able to capture Trenton, New Jersey. This ended up being a huge victory for the army.

The year 1787 is inscribed on the coin because this was the year that New Jersey officially joined the union.

This coin is worth at least its weight in silver. The silver melt value for this coin is $4.27 as of January 28, 2023. This melt value is calculated from the current silver spot price of $23.60 per ounce.