The standard 1999 Connecticut state quarters are made of a clad composition that contains copper and nickel. Clad proof quarters and silver proof quarters were also minted and they sell for more money. Keep reading to learn more about these coins. 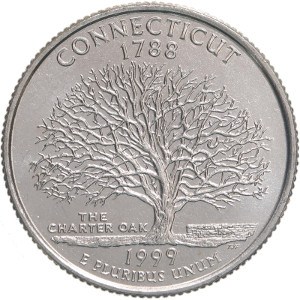 On the reverse side of the coin there is an image of Connecticut's Charter Oak tree. Back when Connecticut was a colony it was granted a royal charter from King Charles II. During a dispute between the British and the colonists, Captain Joseph Wadsworth reportedly hid the charter in the famous Charter Oak tree. This tree has since burned down but it's still known as a symbol of American independence. Click here to read more about this tree's history.

The year 1788 is inscribed on the coin because this was the year that Connecticut officially joined the union.

Click here to search for 1999 Connecticut quarters on Amazon.