The standard 1999 Georgia state quarters are made of a clad composition that contains 75% copper and 25% nickel. Clad proof quarters and silver proof quarters were also minted and they sell for more money. Keep reading to learn more about these coins. 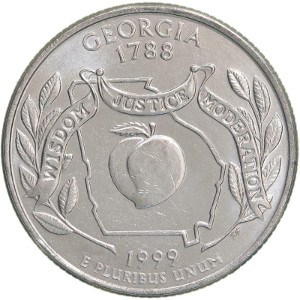 On the reverse side of the coin there is an image of a peach. Georgia is known as The Peach State and this fruit has long been a part of the state's history. In addition to the peach there are two live oak branches on the coin. These branches pay tribute to the state's official tree, the live oak. Georgia's state motto can also be seen on the coin. The state motto is "Wisdom, Justice, Moderation".

The year 1788 is inscribed on the coin because this was the year that Georgia officially joined the union.

The standard 1999 Georgia clad quarters in circulated condition are only worth their face value of $0.25. These coins only sell for a premium in the higher condition grades.

This coin is worth at least its weight in silver. The silver melt value for this coin is $3.29 as of January 27, 2020. This melt value is calculated from the current silver spot price of $18.21 per ounce.