Oregon has diverse landscapes. Throughout the state, you'll find mountains, rivers, beaches, and even deserts. With such variety, Oregon is the perfect spot for the dedicated rockhound. Just like its geography, the gems and minerals of Oregon are diverse. In Oregon, a rockhound can expect to find geodes, agate, jasper, and more. Some have even reported uncovering fossils from millions of years ago.

In this article we'll review Oregon's best rockhounding sites. We'll also review the laws which govern rockhounding in the state, as well as the organizations which are dedicated to helping rockhounds like you.

Certain recreational sites in Oregon are pre-approved for rockhounding. If a recreational site does not specifically declare itself to be a designated rockhounding area then it's best to assume that the activity isn't allowed there. If you really want to be sure then you can contact the site authorities for more information. Rockhounding is permitted on most public sites in the state. The only real exceptions are national monuments. Thankfully, there are so many fruitful public sites throughout the state that this restriction shouldn't have much impact. 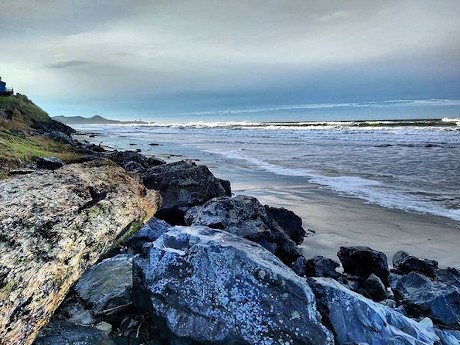 As mentioned above, there are all sorts of rocks to be found in Oregon. However, the state is arguably most famous for its agate. Oregon agate is pure and unblemished. It exists in large quantities throughout the region's towns and cities. It's most commonly found on beaches, such as Moolack Beach.

Moolack Beach is located in Lincoln County. It lies just four miles from the city of Newport. This makes it a great choice if you're visiting Oregon as part of a vacation or business trip. The major advantage of Moolack Beach is that it's not quite as popular as some of the other beaches in Oregon. As such, it remains relatively uncrowded all year long. Moolack Beach is something of a secret even to rockhounds, so you won't have to worry about another collector beating you to valuable specimens.

Just like Moolack Beach, Oceanside Beach is a great spot for any rockhound hoping to add some Oregon agate to their collection. The only downside is that Oceanside Beach is considerably more popular. However, the agate here exists in such large quantities that you won't have any trouble uncovering quality samples even if there is more competition.

Oceanside Beach takes its name from Oceanside, the Tillamook County town in which it resides. It's one of several beaches located in the area. Additional beaches in or near Oceanside include Short Beach, Cape Meares Beach, and Winema Road Beach. While Oceanside Beach is certainly the most fruitful of these beaches, we also suggest visiting others if possible.

The town of Oceanside is also home to a number of recreational areas. Consider contacting these sites to see if they permit rockhounding on their grounds.

Bear Creek is a small stream that runs its entire course in Jackson County, Oregon. Agate, jasper, and quartz crystals have been found in the area. However, Bear Creek is best known for its petrified wood. Petrified wood is so common here that even a total novice can expect to add a few sizable specimens to their collection in a single visit.

It's important to remember that the road leading to Bear Creek has been almost completely neglected. Over the past couple of years, it has fallen into a state of disarray. It becomes particularly treacherous during the winter months. Whatever time of year you choose to visit Bear Creek, make sure you have a reliable vehicle to take you to and from the site.

Whistler Springs is a designated rockhounding site which lies in close proximity to Oregon's famed Mill Creek Wilderness. This spot has been popular with rockhounds for decades. Nevertheless, there remains an abundance of gems and minerals to be found in and around Whistler Springs.

Thundereggs are particularly common in Whistler Springs. These unique rocks are essentially filled with agate and are comparable in size to a baseball. They were named by Oregon's indigenous inhabitants.

Not far from Whistler Springs is Whistler Campground. Many rockhounds stay on this campground throughout the duration of their hunt. We suggest you do the same if you intend to explore the area for multiple days in a row. Though dedicating several days to rockhounding at Whistler Springs is not strictly necessary, it will greatly increase your chances of finding one of the magnificent thundereggs for which the area is so famous for.

Yachats is one of the more unique sites on this list. Unlike the other areas we've looked at so far, Yachats is not any one particular site. It's an entire city. The city is situated in Lincoln County and it's characterized by its many maritime features. It has also become known among rockhounds for the sheer quantity of its gems and minerals.

Agate is the most commonly collected rock in the city. However, rockhounds also regularly discover jasper, crystal quartz, and petrified wood. Invertebrate fossils have also been reported across the city.

You have a fairly good shot at finding a quality specimen no matter where you go in Yachats. However, there are some sites in the area which are particularly fruitful. These sites include Cummings Creek and Rock Creek. Each of these creeks is located within the Siuslaw National Forest, so you could conceivably search both in one day.

During your time in Yachats, you should consider visiting the Yachats State Recreation Area. Here you'll find a wealth of information about the city's gems and minerals.

There are several different rockhounding clubs in Oregon. We recommend reaching out to one of these clubs if you're in the area. The more experienced members of a club will be able to provide you with the insight you need to make the most out of your time rockhounding in the Beaver State. Below we've provided a list to some of Oregon's top rockhounding clubs:

Oregon's diverse geography means that the state has something for rockhounds of all levels. Novices can venture onto one of the state's beaches and be virtually certain of a few interesting finds. If you're a veteran and would like to challenge yourself then the state has more than a few places where you can put your skills to the test. Whatever your level of experience, you will see both your skill set and your collection grow with each visit to Oregon.