The state of Vermont was first inhabited over 10,000 years ago. Its native residents left behind a surprising number of artifacts and relics, which are being discovered to this day. Metal detector hobbyists also report finding items from French occupation, which occurred in Vermont during the 17th century. Relics from British colonists can also be found in the region, as can artifacts from its time as a sovereign state.

Metal detecting in Vermont is regulated by the Archeological Resources Protection Act. The ARPA is a federal law regulating metal detecting all across America. Its aim is to preserve items of historical and cultural significance. This law prohibits the removal of man-made objects more than 100 years of age from public ground.

The only places in Vermont where metal detecting is forbidden are those deemed to be of historical importance. State land is largely okay to detect on, but you'll need a permit. The same goes for many parks throughout the region. Some parks don't require you to have a permit. But they do ask that you check in with park authorities before beginning your hunt. This will give you a chance to familiarize yourself with the specific rules of your chosen park.

Digging is permitted in most places across Vermont, provided that you only use a handheld tool and that you don't make a hole larger than three inches in length. If you do break ground while treasure hunting, then you are expected to make sure the holes you create are filled before you leave the site of your hunt.

Ghost towns are great places to go metal detecting. States across America are littered with ghost towns from the 18th and 19th centuries. Vermont is no different. One of Vermont's most well-known ghost towns is Tyson Furnace.

Like so many American ghost towns, Tyson Furnace was established as a mining village. Settled by Isaac Tyson in 1835, the town was intended to house the employees of his nearby iron ore mine. Over time it became home to merchants, teachers, and more. Schools, churches, and shops emerged in the town.

Things went south for Tyson Furnace in 1855. It was in that year that Isaac Tyson retired and closed the mines that had employed so many of the town's residents. There was a brief attempt to reopen the mines under new management, but that proved unsuccessful. By the end of the century, Tyson Furnace was virtually abandoned.

Today the town lies empty aside from the few buildings that remain standing and the metal detector hobbyists who visit the town. These treasure hunters are often lucky enough to uncover discarded mining tools, coins, and other items belonging to the town's past inhabitants.

Somerset is another ghost town located in Vermont. Unlike many other ghost towns in the state, this town has the distinction of being settled in the 1700s. Established in 1790, Somerset originally served as a meeting place for nearby farmers. They would come to the town to trade goods with members of the public and other farmers. Merchants began to open stores in the town, which increased visitors and eventually resulted in people taking up permanent residency in Somerset.

Somerset actually remained active until the early 1900s. But as the 20th century wore on, the town's economy began to suffer and residents were forced to leave. By the 1940s, it was unincorporated and only a handful of residents were left

Somerset currently has a population of zero, but its treasure hunting possibilities are endless. Because it was such a popular trading spot, finding old coins is a possibility for anyone using a metal detector. Kitchen utensils, mining tools, and even jewelry have also been reported in the town's soil.

Sheldon Springs is a rarity: a small town founded during a 19th century mining boom that remains active today. Though unincorporated, Sheldon Springs remains home to a handful of devoted residents. They tend to be proud of their town and happy to show visitors around, so this could be a good opportunity for metal detecting on private property.

If you can't find somebody willing to let you metal detect on their land, then there's no need to worry. Sheldon Springs has plenty of public spots for metal detecting. For example, the local forest holds centuries of history hidden beneath its soil. In some cases, you won't even have to break ground. Many metal detector hobbyists have uncovered 19th and 20th-century relics above ground. The forest is also home to a number of abandoned buildings, which are perfect for an afternoon of exploration. 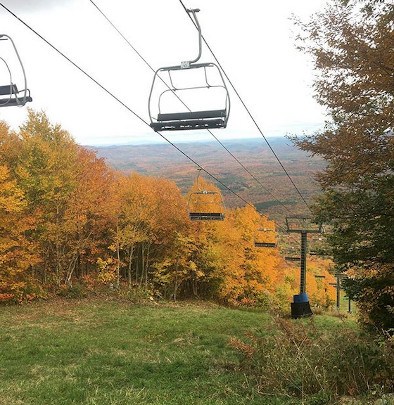 A lot of metal detector hobbyists avoid going into the mountains because climbing them can be dangerous. Bromley Mountain, however, is virtually 100 percent safe. The mountain is home to the luxurious Bromley Mountain Resort. As such, you can rely on a series of lifts and carts to get you to the top in one piece.

Over the years, treasure hunters have uncovered tools belonging to forgotten mountain climbers. They have also found coins and jewelry. In most cases, this jewelry comes from recent visitors to the mountain. For this reason, any jewelry you discover should be turned over to the resort authorities. They will take appropriate action to try and reunite the jewelry with its rightful owner.

Some metal detector hobbyists use Vermont as their base as they visit other states nearby. While we certainly encourage you try metal detecting in Massachusetts and metal detecting in New York, you shouldn't neglect the Green Mountain State. Some noteworthy discoveries have been made in Vermont. With the information above at your disposal, there's nothing to stop you from securing a historic find of your own!

Vermont is also a good state for gold prospecting. Check out our article on gold panning in Vermont.