Gold was first discovered in Vermont in the early 1850s and hopeful prospectors traveled here throughout the remainder of the 19th century. To their dismay, Vermont would prove less productive than many other gold-bearing states. In fact, gold production in Vermont was so unimpressive that no major mining projects were ever attempted here. By the beginning of the 21st century, gold panning in Vermont was practiced by only the most optimistic prospectors. Everything changed in 2011, when Tropical Storm Irene exposed gold deposits that had gone undiscovered in the 1800s.

Today, prospectors pay much closer attention to Vermont. Many of them journey to the state every year to participate in its gold panning renaissance.

Vermont doesn't have the most gold of any state in America, but it may well have the purest. Gold found in most American states rarely exceeds 20 karats. The vast majority of discoveries tend to hover around the 18 karat mark. Vermont gold typically comes in at 23.5 karats. This means that some of the purest gold in the world is flowing through Vermont's rivers.

Gold panning in Vermont does not require a permit, but most other prospecting methods are regulated. A permit is required to operate a sluice box in Vermont. This is where being a resident of the state is beneficial. For Vermont residents, a sluicing permit costs just $25. Out-of-town prospectors will have to pay $50. Sluicing without a permit can result in a minimum fine of $150.

The cost of a sluicing permit may deter some potential prospectors. You may bed tempted you to leave your sluice box at home and stick to traditional panning techniques. This is understandable, though not entirely recommended. Much of Vermont's gold is fine placer and so it can be easier to capture with a sluice box. The sluice box can save you time and increase your chances of retaining small flakes of gold. It's essentially the perfect companion to your gold pan. A few hours of sluicing could pay for your permit.

Gold has been found throughout Vermont, but some counties have proven more prosperous than others. Prospectors have reported noteworthy discoveries in Orange County, Bennington County, and Windsor County, to name a few. Below you'll find a list of Vermont's richest gold-bearing rivers and the counties they run through.

The Williams River is a tributary of the Connecticut River. It runs through Vermont for all of its 27 miles and it's one of the state's most popular gold panning sites. The river begins in the Windsor County town of Andover. It passes through Ludlow and Chester before joining the Connecticut River in Rockingham. Gold can be found throughout the Williams River, but it's most plentiful in the area around Ludlow. 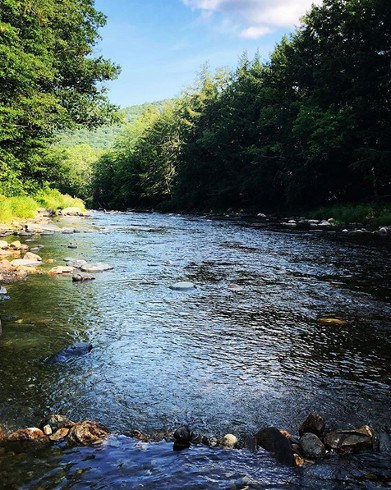 Much like the Williams River, the Ottauquechee River is a tributary of the Connecticut River. It was the site of many of Vermont's earliest gold discoveries. Initial panning of the river proved so successful that many expected it to bring about a gold rush similar to California's. Although it didn't exactly work out that way, the Ottauquechee River remains a popular prospecting spot in Vermont.

The river begins in Killington, a small town in Rutland County. It joins the Connecticut River 41 miles later in Hartland. Gold can be found at all stretches of the Ottauquechee River, but the Bridgewater area is considered the richest.

The Rock River isn't quite as large as some of the other gold-bearing rivers in Vermont. But despite its small size, it's one of the richest in the state. It runs its entire course in Windham County, where it passes Newfane and Dover. It's in these towns that the Rock River is at its most productive and the chances of finding gold are at their highest. The Rock River is a tributary of the West River, itself a noted producer of gold.

Even by Vermont standards, the gold found in the Mad River is small. Because of this, it's best to use a sluicing box in its waters. There is gold to be found in all stretches of the Mad River, but the most productive section is around the town of Warren. Be warned though, the Mad River is a popular location among tourists. If you want to find a comfortable prospecting spot in the river, then you'll have to arrive early.

The area around the Mad River is heavily monitored. The Friends of the Mad River is a non-profit organization dedicated to minimizing damage to the area. It closely monitores the Mad River and everything that goes on around it. So any violation of Vermont's prospecting laws is far more likely to result in a fine here than in other parts of the state.

Generally it's more difficult to find gold in Vermont than in more popular prospecting regions. This is actually the case with most New England states, including Maine and New Hampshire. Prospecting in New England can be challenging but it can also be rewarding. It depends on where you go and which equipment you use.

If you are an experienced prospector then Vermont may be a great place to test your skills. There is plenty of placer gold in the state if you know how to capture it. Vermont also boasts more lode gold than most other New England states. If you're willing to put in the time then your patience should be rewarded.