Indian Head Pennies, also known as Indian Head cents, were minted from 1859-1909. A few different types were minted but each type is composed of copper. These coins are collectible and thus they have numismatic value. 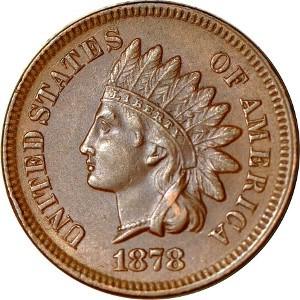 Proof coins with no mint mark were also minted and these coins will sell for more money.

James B. Longacre designed these coins and the design is similar on all three types. On each type the obverse side of the coin features Liberty wearing an Indian headdress. It does not feature a Native American.

The type 1 coin features a laurel wreath on the reverse side of the coin.

The type 2 and type 3 coins features an oak wreath with a small shield on the reverse side of the coin.

Near the end of 1864 the design changed slightly on the obverse side of the coin. The portrait is a little sharper, and the designer's last initial L can be seen on the lower ribbon behind Liberty's neck. It's helpful to rotate the coin 90 degrees counterclockwise in order to better see the initial. The 1864 pennies feature two different varieties, the variety with the L and the variety without the L.

Indian Head pennies are old coins that have a collector's market. Even in heavily circulated condition there is a market for these coins. Pennies in the better condition grades will sell for more money. Uncirculated coins and proof coins will sell for higher prices. In addition, several notable error varieties exist and these error pennies can be quite valuable.

Ultimately, the value of an Indian Head penny will depend on its series and its condition. See the list below to learn the value for any individual penny.