Gold was first discovered in Maine in the mid-1800s. But historically, prospectors frequently passed over the state and instead chose to do their prospecting in more fruitful regions of America. Now times have changed, as Maine's popularity for gold prospecting and panning has risen in recent years. Veteran prospectors visit the state in large numbers, all searching for the gold that went ignored during America's gold rush years.

Prospecting is less regulated in Maine than in many other states. This is one of the primary reasons Maine has enjoyed such a surge in popularity in recent years.

Panning doesn't require a permit in Maine. However gold in the state is generally quite small. Because of this, a gold pan may not be very useful in certain areas. Thankfully you are free to explore alternative extraction methods such as sluicing.

Unlike many other states, Maine does not require a permit for sluicing. As long as your sluice box is less than 10 feet in size, you're free to use it for recreational purposes. Suction dredging doesn't require a permit either. However, you'll have to make sure that your dredge's hose doesn't exceed four inches in diameter.

Prospecting on private property without permission is prohibited. If you find somebody willing to let you prospect on their property, then you should get their written permission. If you're unable to obtain written permission then keep your activity to public land.

There are 16 counties in Maine. Gold has been discovered in 11 of them. In the section below, we'll review the state's most active gold-producing counties.

Aroostook County is the northernmost county in Maine. It also holds the distinction of being the state's largest county by a significant margin. Unsurprising given its size, Aroostook has been responsible for much of the gold that has been found in Maine.

Prospecting is practiced throughout Aroostook County, but activity is highest around the town of Ashland. Not too far removed from Ashland, you'll find Bald Mountain. This mountain has been home to a number of major mining projects, and it's a popular site for recreational gold panning. Bald Mountain is also known to be a reliable producer of silver and copper.

Oxford County isn't as big as Aroostook County, but it rivals it in terms of gold production. The Oxford town of Hiram is particularly rich. This is because Hiram is home to Mount Cutler, a reliable source of gold and other valuable minerals. A number of major mining operations have taken place at Mount Cutler. Most of these operations were successful and produced significant quantities of lode gold. Because of this, most of the gold still to be extracted from the area is placer. However, nuggets are still reported at Mount Cutler on occasion.

Lode gold is extremely rare in Franklin County, but its placer content more than makes up for that. Placer gold is regularly reported in the area, which has made it a popular stop for out-of-town prospectors.

Franklin County is Maine's second-least populated county. This means that even with frequent out-of-town prospectors, it hasn't been mined nearly as much as other counties in the state. It's quite possible that large amounts of gold still lie undiscovered in Franklin County.

Most of the gold found in Maine has been placer gold. For prospectors hoping to find some lode gold, Cumberland County is the place to be.

There are gold-bearing rivers flowing through each of the counties mentioned above. In the section below, we'll review the most productive rivers.

The Swift River is perhaps the most popular prospecting spot in all of Maine, and for good reason. Panners often report finding placer gold in its waters, but lode gold is not uncommon. The river has its headwaters in Franklin County with tributaries running throughout western Maine. Some of the most fruitful of these tributaries can be found in Oxford County. The Coos Canyon area is a particularly promising spot for Swift River panning.

The Sandy River runs through Franklin County. It can be accessed through a number of Franklin County towns such as Farmington, New Sharon, and Strong. It joins the Kennebec River in Somerset County, where its production is quite impressive.

The gold found in the Sandy River is relatively fine, so it may be a challenge to capture using just a standard gold pan. Sandy River prospectors are advised to use a sluice box or suction dredge if they want a better chance at success. 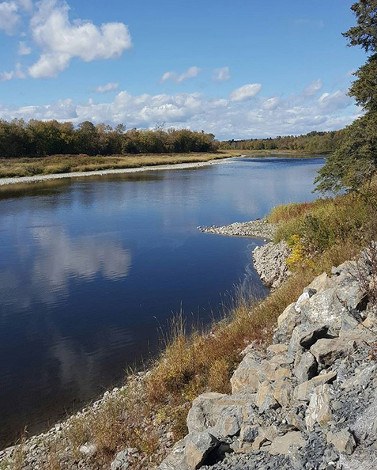 It's no surprise that much of the prospecting in Aroostook County focuses on the Aroostook River. The largest tributary of the Saint John River, the Aroostook River runs through a number of towns in the area. Its must fruitful stretch is located in Ashland. But prospectors should also check out the often overlooked towns of Washburn, Presque Isle, and Caribou.

Gold panning in Maine can be rewarding, but also challenging. Even with the state's relaxed prospecting regulations, there's no guarantee that your visit will be worthwhile. If you're new to gold panning, we suggest heading to a more productive state to get some experience. Nearby Vermont is a better state for gold panning.

If you are an experienced prospector then a trip to Maine can be fun and productive. With the right combination of skill and patience, you could make some major finds. Even if you don't find any gold, silver and other valuable minerals are legitimate possibilities.