Historians suspect that gold panning in New Hampshire first started over 300 years ago. But it wasn't until the mid-19th century that New Hampshire prospectors began making significant discoveries. In 1864 gold was discovered in Lynam, sparking a miniature gold rush. However it soon became apparent that New Hampshire did not have the gold production to warrant major mining operations.

All of the major mining projects moved out of the state in the early 1900s. However individual prospectors journey to New Hampshire to this day. Most of these prospectors arrive knowing that they aren't going to get rich. But they are confident that there is enough undiscovered gold in the state to make panning its waters worthwhile.

Certain New England states have relaxed gold mining laws in an attempt to encourage prospectors to visit. New Hampshire is not one of them. Prospecting in New Hampshire is regulated by a series of laws, many of which center around the use of motorized mining equipment. To use a suction dredge or sluice box, you must obtain a permit from the New Hampshire Department of Environmental Services. Use of a gold pan is less restricted and does not require a permit.

Although the water in most New Hampshire rivers is property of the state, river beds are often private property. Before disturbing a river's bed, seek permission from the owner of the land. Failure to do so will put you in violation of New Hampshire trespassing laws and you'll likely forfeit any gold you find.

Types of Gold in New Hampshire

Most of the gold flowing through New Hampshire rivers is fine placer. Prospectors using a traditional pan may have a hard time capturing New Hampshire gold because of its small size. If you want a greater chance of success, then you should consider applying for a dredging or sluicing permit. Finding lode gold is a small possibility in New Hampshire, and it's actually more common here than in other New England states.

Best Rivers and Brooks for Prospecting

Most of New Hampshire's rivers and brooks have gold flowing through them. Of course, some of them are more popular among prospectors than others. In the section below, we'll be examining some of the state's most promising gold-bearing rivers and brooks. 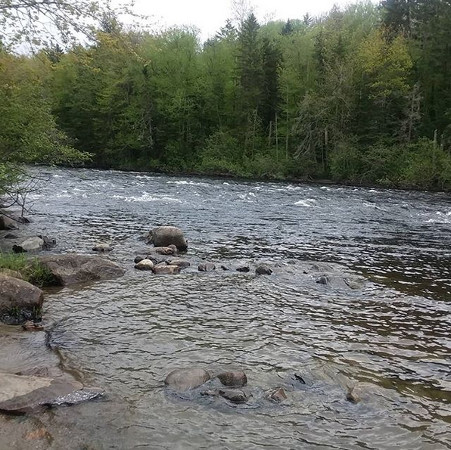 The Androscoggin River runs through two states. It begins in Errol, New Hampshire and ends 178 miles later in Maine. Gold can be found throughout the river, but most New Hampshire prospectors focus on the area around the city of Berlin.

Tunnel Brook is located in Benton, Grafton County. Benton is a little-known town and has a population of less than 400. Unsurprisingly, it isn't a popular spot among tourists. But this actually has its advantages. Panning in Benton can be more enjoyable because you don't have to worry about crowds when searching for a prospecting spot.

There's a lot of placer gold to be found in Benton, although it's quite small in size. Reports of nuggets in the area are rare, even by New Hampshire standards. A sluice box is recommended for Tunnel Brook prospecting.

This river can be accessed via Warren, Wentworth, and Rumney. Gold has been reported in all locations. The point at which the Baker River drains into the Merrimack River is particularly fruitful. Despite discoveries of placer gold in its waters dating back centuries, there are portions of the Baker River that are relatively untouched. Dedicated prospectors often seek out these ignored areas for gold panning. Many who do so report significant placer discoveries. 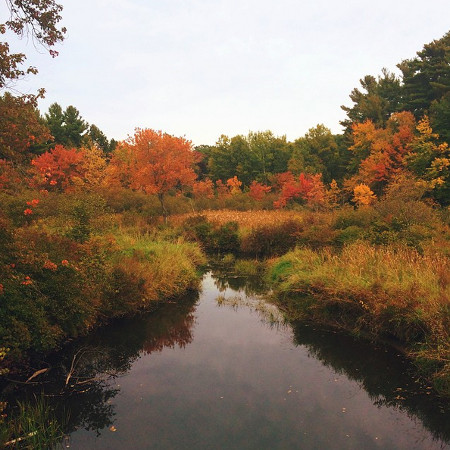 Salmon Hole Brook is a rich source of placer gold. Meanwhile, the presence of quartz rock in the river means lode gold isn't entirely out of the question. Salmon Hole Brook is located in the Grafton County town of Lisbon, which has a population of about 1600.

During Memorial Day weekend, the town hosts an annual lilac festival which attracts tourists from all over the country. It's best to avoid prospecting in the area during this time as comfortable spots at Salmon Hole Brook will be harder to come by.

Lisbon is also home to a stretch of the Androscoggin River. So if you don't have success panning at Salmon Hole Brook, then you'll have a second location to try.

Traveling to New Hampshire just for prospecting may be difficult to justify. Gold in this state is nowhere near as plentiful as it is in places like California or Oregon. The gold that does run through its rivers often requires motorized equipment to extract. For this reason, we generally advise novices to practice their panning in more productive states.

If you are a beginner visiting New Hampshire on a business trip or family vacation, then we encourage setting aside time to pan the state's rivers. Be advised though that you probably won't have much success. However, the opportunity to develop your skills in one of America's most challenging prospecting locations will pay off in the future. For experienced prospectors who like a challenge, New Hampshire is a good location. It's a beautiful state and with a little patience, veterans can expect to capture placer gold in the state's often overlooked rivers and brooks.