The standard 2017 George Rogers Clark quarters are made of a clad composition that contains copper and nickel. Clad proof quarters and silver proof quarters were also minted and they sell for more money. Keep reading to learn more about these coins. 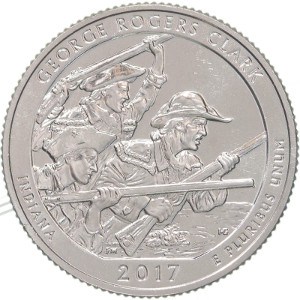 On the reverse side of the coin the design shows George Rogers Clark leading his fellow militiamen through flooded terrain to Fort Sackville. This was part of the Illinois campaign where Clark and his militiamen took control over several different British posts in Illinois Country (modern day Illinois and Indiana).

George Rogers Clark National Historical Park is located in Vincennes, Indiana. This park is situated on what is believed to be the old Fort Sackville.

The standard 2017 George Rogers Clark clad quarters in circulated condition are only worth their face value of $0.25. These coins only sell for a premium in the higher condition grades.

The 2017 S proof George Rogers Clark quarter is worth around $3 in PR 65 condition.

This coin is worth at least its weight in silver. The silver melt value for this coin is $4.40 as of October 23, 2021. This melt value is calculated from the current silver spot price of $24.31 per ounce.

The 2017 S silver proof George Rogers Clark quarter is worth around $10 in PR 65 condition.