The standard 2013 Perry's Victory quarters are made of a clad composition that contains copper and nickel. Clad proof quarters and silver proof quarters were also minted and they sell for more money. Keep reading to learn more about these coins. 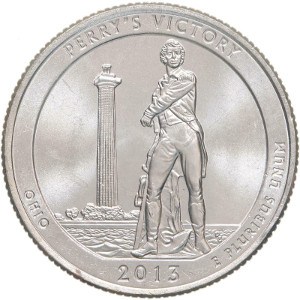 On the reverse side of the coin the design shows the statue of Master Commandant Oliver Hazard Perry in the foreground and the Peace Memorial in the background. These structures are located at Perry's Victory and International Peace Memorial in Put-in-Bay, Ohio.

Perry's Victory and International Peace Memorial commemorates the Battle of Lake Erie which was fought during the War of 1812. The US won this important naval battle.

Click here to search for 2013 Perry's Victory quarters on Amazon.