The standard 2013 Fort McHenry quarters are made of a clad composition that contains copper and nickel. Clad proof quarters and silver proof quarters were also minted and they sell for more money. Keep reading to learn more about these coins. 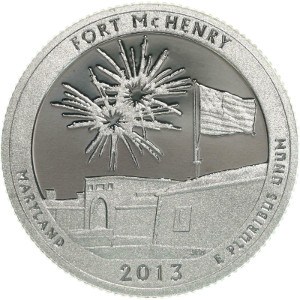 On the reverse side of the coin the design shows Fort McHenry during a Defenders' Day fireworks celebration.

Fort McHenry was the site of an important battle during the War of 1812. In 1814 the US fought off the British navy when they attacked from Chesapeake Bay. This battle inspired poet Francis Scott Key to write America's National Anthem. The historic Fort McHenry is now a national park. It's located in Baltimore, Maryland and it attracts over a half million visitors each year.

The standard 2013 Fort McHenry clad quarters in circulated condition are only worth their face value of $0.25. These coins only sell for a premium in the higher condition grades.

This coin is worth at least its weight in silver. The silver melt value for this coin is $4.69 as of April 16, 2021. This melt value is calculated from the current silver spot price of $25.92 per ounce.

The 2013 S silver proof Fort McHenry quarter is worth around $8 in PR 65 condition.