The standard 2012 Hawaii Volcanoes quarters are made of a clad composition that contains copper and nickel. Clad proof quarters and silver proof quarters were also minted and they sell for more money. Keep reading to learn more about these coins. 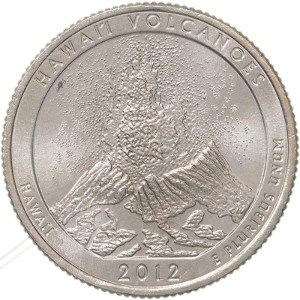 On the reverse side of the coin the design shows an erupting Kilauea Volcano. This volcano is apart of Hawaii Volcanoes National Park.

Hawaii Volcanoes National Park is located on the big island of Hawaii. This park spans 323,431 acres and it has two active volcanoes- Kilauea and Mount Loa.