The standard 2012 Chaco Culture quarters are made of a clad composition that contains copper and nickel. Clad proof quarters and silver proof quarters were also minted and they sell for more money. Keep reading to learn more about these coins. 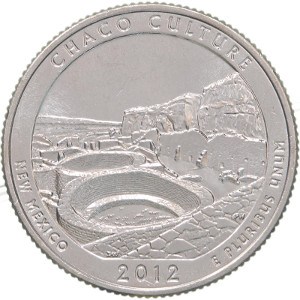 Chaco Culture National Historical Park is located in New Mexico and it preserves ancient pre-Columbian ruins and pueblos. Among the historical sites is Chaco Canyon, which was once a large part of the local Puebloan culture.

The standard 2012 Chaco Culture clad quarters in circulated condition are only worth their face value of $0.25. These coins only sell for a premium in the higher condition grades.

The 2012 S proof Chaco Culture quarter is worth around $3 in PR 65 condition.

This coin is worth at least its weight in silver. The silver melt value for this coin is $4.67 as of April 18, 2021. This melt value is calculated from the current silver spot price of $25.81 per ounce.

The 2012 S silver proof Chaco Culture quarter is worth around $8 in PR 65 condition.