The standard 2001 North Carolina state quarters are made of a clad composition that contains copper and nickel. Clad proof quarters and silver proof quarters were also minted and they sell for more money. Keep reading to learn more about these coins. 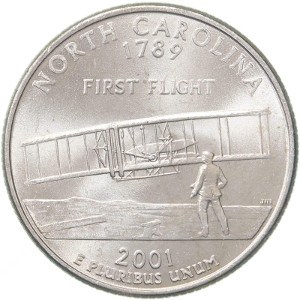 On the reverse side of the coin there is a design derived from the iconic 1903 photograph of the "first flight". The first flight was when the Wright brothers managed to fly a plane for the first time in history. Orville Wright was the pilot during this flight and his Brother Wilbur Wright looked on from ground-level.

The year 1789 is inscribed on the coin because this was the year that North Carolina officially joined the union.

The standard 2001 North Carolina clad quarters in circulated condition are only worth their face value of $0.25. These coins only sell for a premium in the higher condition grades.

The 2001 S proof North Carolina quarter is worth around $3 in PR 65 condition.

This coin is worth at least its weight in silver. The silver melt value for this coin is $4.07 as of December 04, 2021. This melt value is calculated from the current silver spot price of $22.53 per ounce.

The 2001 S silver proof North Carolina quarter is worth around $10 in PR 65 condition.