The standard 2001 New York state quarters are made of a clad composition that contains copper and nickel. Clad proof quarters and silver proof quarters were also minted and they sell for more money. Keep reading to learn more about these coins. 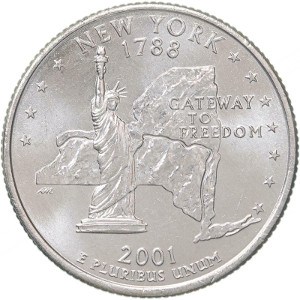 On the reverse side of the coin there is an outline of the state and an image of the Statue of Liberty. The iconic Statue of Liberty was a gift from the French and it was dedicated on October 28, 1886. It was restored multiple times over the years and it continues to stand tall on Liberty Island in New York Harbor.

The year 1788 is inscribed on the coin because this was the year that New York officially joined the union.