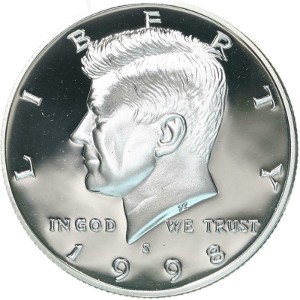 The 1998 S silver proof half dollar with a matte finish is a special edition coin with a limited mintage. The matte finish gives this coin a frosted look. This coin was originally sold as part of a two-coin set that included a Robert F. Kennedy silver dollar. Some of the proceeds went to the Robert F. Kennedy Center for Justice and Human Rights.

Both the 1998 P half dollar and 1998 D half dollar are each worth around $3 in uncirculated condition with an MS 63 grade.

This coin is worth at least its weight in silver. The silver melt value for this coin is $8.54 as of January 28, 2023. This melt value is calculated from the current silver spot price of $23.60 per ounce.

The 1998 S silver proof half dollar with the matte finish is worth around $125 in PR 65 condition.