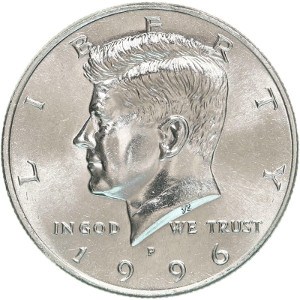 Both the 1996 P half dollar and 1996 D half dollar are each worth around $3 in uncirculated condition with an MS 63 grade.

This coin is worth at least its weight in silver. The silver melt value for this coin is $8.28 as of September 26, 2020. This melt value is calculated from the current silver spot price of $22.89 per ounce.