The first coin issued was the 1983 Los Angeles XXIII Olympiad silver dollar. Following its release, a further 23 coins were minted to commemorate the Summer and Winter Olympic games. The final coins were released in 2002 ahead of the Salt Lake City Winter Olympics.

In preparing its 27 US Olympic commemorative coins, the United States Mint worked with 18 designers. In total, these designers put forth 44 different designs. The designs which were printed depicted Olympic athletes, events, and facilities. The 1984 Los Angeles Olympiad XXIII silver dollar bore the image of a discus thrower. An interesting note is that both the silver and bronze medal in the 1984 men's discus throw went to American competitors.

The US Olympic commemorative coins can be quite valuable and their value has risen over recent years. The value of an Olympic coin mainly depends on whether its silver or gold.

Silver dollars commemorating the Summer or Winter games are widely available. Because of this, they aren't very valuable. In most cases, these silver dollars go for around $29. The Special Olympics silver dollar, however, is a little more valuable. The value is around $30. 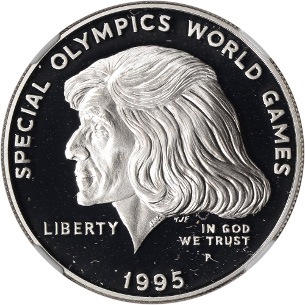 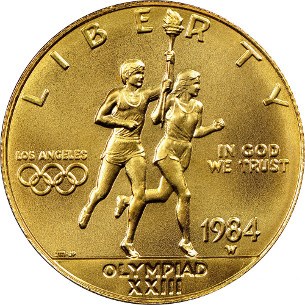 Click here to search for US Olympic coins on Amazon.

Numismatists in the United States often have a hard time building their collection. This is because the US is a comparatively new country. For example it's easier to collect old roman coins than old American coins. But this is what makes US Olympic commemorative coins so beloved among American collectors. Although they are not thousands of years old, they can still be worth several hundreds of dollars.

It's also worth noting that ancient coins have pretty much reached their maximum worth for the time being. They are unlikely to see a significant increase in value in the near feature. US Olympic commemorative coins, however, are increasing in value with each passing decade. They are great coins to own, whether you are American or not.