The phrase "six flags over Texas" was coined in reference to the six nations that have ruled the state. These nations are Spain, France, Mexico, the Republic of Texas, the Confederate States of America, and finally the United States of America. Each ruling nation left its mark on Texas and relics from all nations can be found throughout the state. Include the items left behind by its four indigenous tribes and Texas becomes a great place to treasure hunt.

Treasure hunting in Texas is governed by the Archaeological Resources Protection Act (ARPA). The ARPA is a federal law designed to protect objects of potential historical significance. It forbids treasure hunters from excavating objects that are more than 100 years old. If an object is discovered on private property, then the ARPA does not apply. However, the item in question is the legal property of the landowner and not the treasure hunter.

Treasure hunters in Texas often find themselves at odds with the Texas Historical Commission (THC). According to the Antiquities Code of Texas, agencies intending to disturb more than 5000 cubic yards of earth must alert the THC beforehand.

Metal detecting is permitted in state parks across Texas. However, you must first obtain permission from the specific park you intend to visit. Similarly, treasure hunting is permitted on the grounds of public schools. But it's not allowed on private school grounds without approval from school management.

There are gold-bearing streams that run throughout Texas. For the highest chance of success, take your metal detector to the shores of the Llano River. A tributary of the Colorado River, the Llano River runs through the towns of Kingsland, Mason, and Llano. Small flakes of gold have been found along the banks of the river. Prospectors have also reported gold deposits in the cracks of the river's rocks and a metal detector will help you find this gold. You could also find jewelry left behind by tourists.

Stories of buried treasure in Texas have been told for centuries. Some are a little more plausible than others, but they are all interesting.

One plausible story is that of Jean Lafitte, a French pirate who spent a lot of time in the United States. According to legend, Lafitte buried some kind of treasure on Galveston Island. This is indeed a possibility because Lafitte actually used the island as his hideout for a number of years. He is also said to have buried treasure in other southern states.

Also of note is the Singer treasure. In the mid-1800s, John Singer was sailing with his wife and children when a storm hit. The family's ship wrecked on Padre Island. Not only did the family survive, but they grew to love the island. In fact, they felt so much at home that they refused to leave even after they were found by a rescue vessel. The Singers thrived on Padre Island, earning significant income from fishing and farming. They even made money investing in the invention of John's younger brother- the Singer Sewing Machine.

The Singers did so well on Padre Island that many suspected there was more to their success than met the eye. Stories spread that John Singer had found $80,000 worth of gold coins on the island. According to legend, Singer buried these coins, along with silver bars and plates, on a sand dune dubbed "Money Hill". When the Civil War broke out, the Singer family was forced to leave Padre Island and the rumored treasure was never found.

There are thousands of ghost towns in Texas. This should come as no surprise given the state's history and size. Many of these ghost towns are popular treasure hunting destinations. You'll find the most fruitful of them examined below.

On the northwestern shore of Copano Bay, you'll find the town of Copano. This town was frequented by pirates and smugglers throughout the 18th century. It was abandoned during the 1880s and remains empty to this day. Many believe the outlaws who passed through Copano may have buried their unlawful earnings there. Because the town was visited by so many criminals, it's safe to assume that there is indeed some treasure lying below its soil. The value of that treasure is up to you to find out. 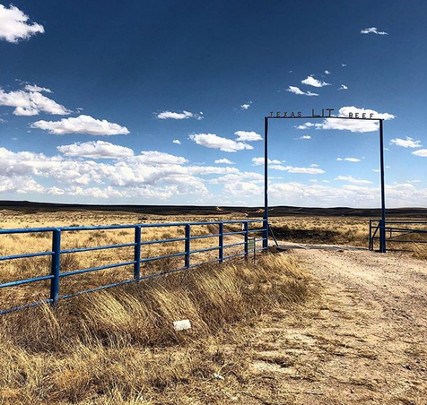 Tascosa was once on track to become one of the most prosperous towns in Texas. It was the capital of ten counties in the Texas Panhandle. But today it lies abandoned on the shores of the Canadian River.

During its decline, the town became known for violence. One gunfight in March of 1886 claimed the lives of four people. It was this lawlessness that made Tascosa such a popular stop among outlaws trying to outrun justice. Many are said to have buried stolen goods in the town in an effort to hide evidence of their crimes. If this is true, then it's likely that unclaimed treasure still lies beneath the town's once bustling streets.

You won't find much buried treasure in Fort Holland. However, it's worth a visit if you're interested in military relics. The town was constructed as a military base to defend against Francisco Villa in 1918. Prior to this, the area was the site of a skirmish between US troops and Apache Indians. Relics from that battle, along with items left behind by World War I soldiers, can be found in Fort Holland to this day.

Texas doesn't have a lot of naturally-occurring gold. For this reason, gold prospecting in Texas is not a popular activity. But for the general treasure hunter, Texas can be somewhat of a promised land. What the state lacks in naturally-occurring gold it more than makes up for in military artifacts and possible buried treasure. Its history is so extensive that treasure hunting can be successful in all regions of the state. Whether it's a Spanish coin or a World War 1 medal, there are a lot of different relics that can be found in Texas.