Native American artifacts are regularly uncovered in North Carolina. Relics from European adventurers are also common, as are relics from the Revolutionary War.

One of the most noteworthy discoveries in American history was made in North Carolina in 1996. It was in that year that treasure hunters uncovered the remains of Blackbeard's legendary ship The Queen Anne's Revenge. Some say the notorious pirate buried some of his ill-gotten bounty in North Carolina. Will you be the one to find it?

Whether you're searching for Blackbeard's gold or modern misplaced items, this article will set you on the right track. We'll examine North Carolina's most productive metal detecting sites, as well as the metal detecting laws.

Metal detecting in North Carolina is regulated by the Archeological Resources Protection Act. The ARPA is a federal law regulating metal detecting all across America. Its aim is to preserve items of historical and cultural significance. This law prohibits the removal of man-made objects more than 100 years of age from public ground.

Metal detecting laws in North Carolina are a little odd. For example, metal detecting is only allowed in state parks if you're trying to locate your own lost property. Even then, you must have a permit and you'll be accompanied by a ranger for the entire duration of your search.

There is no universal law governing metal detecting on North Carolina's beaches. Some beaches forbid it entirely while others allow it unrestricted. Many beaches require metal detector hobbyists to obtain a permit beforehand. If you are considering metal detecting on a beach, then make sure to contact the relevant authorities beforehand to confirm the legality of your hunt.

State forests are bound by the same laws as beaches. However private property is unrestricted. If you can find forest on private land, then you have a decent chance of making an interesting discovery. Remember: Metal detecting on private property requires the permission of the land owner. Written permission isn't explicitly required by North Carolina law, but you'll be grateful to have it should any issues arise. 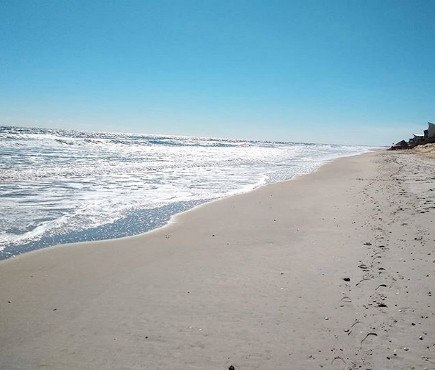 For a long time, Topsail Island was ignored by treasure hunters. That all changed in 2018 when Hurricane Florence hit its shores. A wide range of items got uncovered on Topsail Island beaches after the storm hit. The storm pushed items closer to the surface than they had been in hundreds of years.

Bradley Dixon was the first to explore Topsail Island's beaches in the wake of Hurricane Florence. In just a few short days, he found rings, watches, bullets, coins, and more. He even uncovered a projectile weighing in at 27 pounds.

To this day, treasure hunters continue to report interesting finds on Topsail Island. Head to any one of its beaches with your metal detector to search for yourself.

The city of Burlington is home to about 54,000 people. On top of that, it attracts tens of thousands of visitors per year. Unsurprisingly, this makes it a great spot for finding lost pieces of jewelry.

In Burlington it's also possible for metal detector hobbyists to uncover historic items. Some have reported finding buttons and weapons from the Civil War. Others have discovered items from the Revolutionary War. Some particularly lucky treasure hunters have found even older artifacts.

There are metal detecting clubs located throughout Burlington. We highly suggest consulting one before visiting the city. The club members can guide you towards the city's most fruitful spots while also helping you avoid violating North Carolina's metal detecting laws.

Dana is a small unincorporated community in Henderson County. Home to less than 4,000 people, it's often overlooked. But despite its quaint simplicity, Dana is perfect for metal detecting.

Tracing its roots all the way back to the early 1800s, Dana almost feels like a ghost town. And just like ghost towns, its soil holds many relics from past inhabitants. It's not uncommon to find coins, buttons, or gardening tools in Dana's soil.

More modern items have also been discovered in Dana's soil. For example, a local metal detector hobbyists once found a class ring from a Texas high school. Against all odds, the man who made the discovery managed to reunite the ring with its owner, who had lost it more than 20 years earlier.

Metal detecting in North Carolina is truly a case of quality over quantity. Finds are not as plentiful here as they are in some other states. But when finds do occur they are usually interesting. Many items uncovered by treasure hunters have a fascinating backstory.