South Carolina has a rich history. The state is best known among history buffs for its role in the Civil War. At the beginning of the war, it earned the dubious distinction of being the first state to vote to secede from the Union. Artifacts from this period are still discovered by the state's treasure hunters.

The state's extensive history has made it a popular site among dedicated treasure hunters. With your metal detector by your side, you may very well uncover artifacts from some of the most important periods in American history.

Metal detecting in South Carolina is regulated by the Archeological Resources Protection Act. The ARPA is a federal law regulating metal detecting all across America. Its aim is to preserve items of historical and cultural significance. This law prohibits the removal of man-made objects more than 100 years of age from public ground.

Metal detecting is restricted in many portions of South Carolina. Most notably, state parks are off limits to those without a permit. With a permit you are free to use your metal detector in approved areas of your chosen park. Be sure to check with park authorities beforehand to determine where these approved areas are.

Lands of historical significance are entirely off limits to treasure hunters. The same goes for land that might be easily damaged. On more resilient land, digging is permitted only with the use of handheld tools. Any holes you make must be filled before you leave the site. 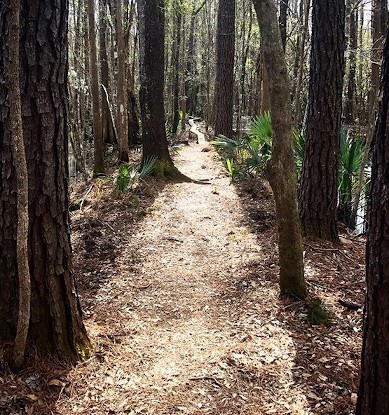 Francis Marion National Forest contains 258,864 acres. Its immense size causes it to stretch from Charleston County into Berkeley County. This means that this forest is easily accessible from multiple points in South Carolina.

This forest was frequently walked through during the Revolutionary War. Relics from this era, including buttons and badges, have been uncovered in its soil. Of course these relics are protected by the ARPA.

If you're hoping to take your finds home with you, then Francis Marion National Forest has something for you as well. This is one of the most popular tourist destinations in the state. As such, you can expect to find rings, watches, and other easily misplaced items.

As mentioned in the previous entry, a portion of Francis Marion National Forest rests in Berkeley County. However, treasure hunting opportunities in the country stretch far beyond the forest.

There are productive spots located throughout Berkeley County. For example, Lake Moultrie has been the scene of countless finds over the years. But what really sets the county apart is its high concentration of private property.

With so much private land to focus on, you won't have to worry about accidentally violating South Carolina's metal detecting laws. Of course it's essential that you get the land owner's permission to search on their property.

Morris Island is an island which means that it's a little more difficult to access than other spots in South Carolina. However the potential reward is worth the effort.

This island is notable for its role in the Civil War. A strategic stronghold, it housed soldiers from the Confederacy during the early days of the war. It later fell under control of the Union. Artifacts from both sides can be found in the soil.

Morris Island is also known for its lighthouse. The Morris Island Light was built in 1876. In 1982, it was added to the National Register of Historic Places. Relics left behind by past lighthouse keepers have been uncovered in the sand and water which surround the structure.

Every metal detector hobbyist knows that ghost towns are great places to hunt for treasure. There are ghost towns scattered all throughout South Carolina. Undoubtedly the most mysterious of them is Mountville.

Mountville lies in Laurens County. That's pretty much everything we know about it. In 2000, just under 150 people were recorded to be living there. However, even they couldn't provide a whole lot of insight into the town's history. As residents passed away, so did any chance we had of gaining firsthand information about Mountville. Therein lies the allure for contemporary treasure hunters.

You and your metal detector could be the link we need to better understand Mountville. You have the potential to unearth items from its heyday. This will help historians piece together what life was like in the town hundreds of years ago, as well as what led to its downfall.

Relics from the Revolutionary and Civil War have been found throughout South Carolina. Artifacts from indigenous tribes and European explorers have also been found. This is what makes South Carolina a great state for metal detecting. Your chances of uncovering historical relics are higher here than in most other states!

South Carolina also a good state for gold prospecting. Check out our article on gold panning in South Carolina.