Montana experienced a series of gold rushes throughout the 1860s. This brought countless prospectors to the state, many of whom experienced success. These days, recreational prospectors and treasure hunters continue to travel to the aptly named Treasure State. Many report finding small flakes of gold undiscovered by their predecessors. Others have used metal detectors to identify tools left behind by past residents.

In Montana you can use a metal detector on all land owned by the Bureau of Land Management but you can't remove any artifacts from the land. Treasure hunters can extract any item they wish from private land as long as they obtain permission from the landowner.

It's important to note that Montana treasure hunters must still adhere to the Archaeological Resources Protection Act (ARPA). The ARPA is a federal law governing metal detecting and treasure hunting across America. It prohibits the extraction of man-made items that are more than 100 years of age from public ground.

Metal detecting is essentially prohibited in state parks because you aren't allowed to disturb the topsoil. This is according to Montana State Park Regulations.

Montana boasts more tales of buried treasure than many of its neighboring states. This is one of the reasons why the state is so popular among treasure hunters in the West. Some of Montana's most notable buried treasure tales are outlined below.

The Springer Gold Mine

The Springer Gold Mine was allegedly discovered by three miners during Montana's gold rush period. According to legend, the men extracted three hundred pounds of gold from the mine in almost no time at all. However when they tried to return for more mining, they were unable to find the mine. Rumor places the Springer Gold Mine near the Bagg's Creek Drainage, but no further details exist.

Towards the end of 1863, a group of bandits known as "The Plumber Gang" terrorized Virginia City, Montana. During their crime spree, the Plumber Gang stole $800,000 worth of gold bullion. They buried the loot in the Hollowtop Mountain, just seven miles southeast of Waterloo. The gang was captured in December of 1863 and sentenced to death by hanging. The executions were carried out before they ever had the chance to return to Hollowtop Mountain and reclaim their treasure.

There probably isn't a treasure hunter in America who hasn't heard of the Fenn Treasure. The treasure, worth upwards of $1 million, was buried by art dealer Forrest Fenn. According to Fenn himself, he buried the treasure to inspire treasure hunters across the world and to ensure that his legacy would live on after his death. Although he has not revealed the exact location of the bounty, Fenn has stated that it lies somewhere in the American stretch of the Rocky Mountains. This places it in one of five states: Idaho, Montana, Colorado, Wyoming, or New Mexico.

In the latter half of the 19th century, hundreds of people traveled to Montana. Motivated by tales of major gold strikes, they set up mining camps throughout the state. Many of these camps now exist as ghost towns and are commonly visited by urban explorers and treasure hunters. 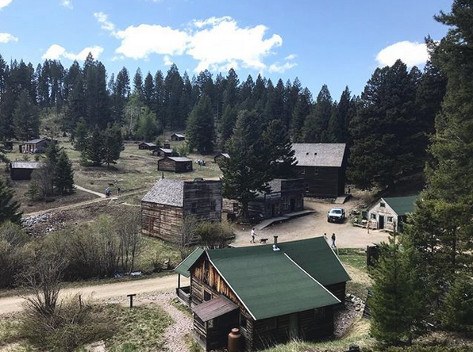 In 1865, gold was discovered at First Chance Gulch. This caused hopeful prospectors to travel to the area in droves. Shortly after, the mining town of Garnet was established.

As it expanded, Garnet grew to include a school, saloons, restaurants, and gambling houses. Mining in the town began to slow in the early 1900s. Its population gradually declined over the next few decades and by 1940 it was completely abandoned. Today, the remains of Garnet are managed by the BLM and the Garnet Preservation Association. More than two-dozen buildings remain standing, providing a glimpse into 19th century mining life.

The ghost town of Kendall is located in the North Moccasin Mining District. This town was founded in 1901 by its namesake, Harry Kendall. The local mining industry served as the foundation of the town's economy. It employed hundreds of people and inspired hundreds more to move their families to Kendall. At its peak, the town was home to more than 1500 people. It boasted four major gold mines: Horse Shoe Mine, Kendall Mine, Barnes-Kind Mine, and Santiago Mine. The Santiago Mine was the largest of the four and its closure in 1920 had devastating effects on Kendall. In the years that followed, residents abandoned the town in search of employment elsewhere.

Coloma is a strange case in that very little is known about it. Sitting in Missoula County, Coloma is believed to have been founded some time in 1893. However, even this is a rough estimation. Records indicate more than $200,000 worth of gold being extracted from the town during its heyday. Historians suspect that the town began to suffer in 1916 when significant cash was spent to construct a mill that never became as productive as expected. Today, people visit Coloma to discover more about its history and the people who called it home.

As great as Montana is for treasure hunting, it's not the ideal vacation destination for most families. Apart from the national parks, there are few major tourist attractions in the state. For this reason, we typically don't recommend Montana for novice treasure hunters hoping to tie in some metal detecting with their family vacation. There are several other states in America where you can indulge in treasure hunting while your family is also entertained. For example, metal detecting in California while on family vacation is a good option.

If you are in a position to dedicate an entire trip to metal detecting, then Montana should be high on your list. Panning for gold in Montana can also make a trip here worthwhile. With its gold, ghost towns, and buried treasure, Montana provides a good environment for extended treasure hunting trips.