The California Gold Rush began in 1848. By the time it ended in 1855, more than 300,000 people had relocated to the area. This massive increase in population was directly responsible for California receiving statehood. Today, prospectors and treasure hunters alike continue to venture to California. Many utilize metal detectors and similar tools to find gold and other valuables.

Metal detecting in California is regulated by the Archaeological Resources Protection Act (ARPA). Under the ARPA, an object cannot be extracted from public land if it's more than 100 years old and of human origin. The ARPA is not applicable on private land. Treasure hunters are free to remove any item, regardless of its age or origin, from private land as long as they obtain the landowner's permission.

Unlike with gold panning, metal detecting is permitted on active mining claims. However, treasure hunters must restrict their activity to the surface of the claim. Digging on an active mining claim without permission is forbidden. There are over 20,000 active mining claims in California. To avoid inadvertently trespassing on one, contact the Bureau of Land Management's California Department when you are uncertain about the ownership of a patch of land.

Using a metal detector in a national park is forbidden by the Code of Federal Regulations. State park laws are a lot less strict. You are free to use a metal detector in California state parks as long as you don't dig up any artifacts of geological or archaeological significance. You also can't disturb any plants or wildlife.

In 2014 a California couple unearthed 1400 Gold Rush-era coins while walking their dog. The coins had been buried in a series of metal cans and were valued at a staggering $10 million. This discovery inspired treasure hunters across the state to take out their metal detectors and try to find some of California's buried loot for themselves. Below are three stories of buried treasure that you could look for.

Outlaws were infamously active in California throughout the 19th century. Many Wild West criminals would bury their stolen goods to hide evidence of their wrongdoings. They would later return to reclaim the stolen goods. Of course, they were often arrested or killed before they had the chance to do so. This is what allegedly happened to a gang of outlaws who held-up a Wells Fargo wagon in 1853. The wagon is said to have been carrying $30,000 worth of gold, all of which was stolen in the raid. It's believed that the bandits buried the gold in an oak grove. The exact location of that oak grove is unknown, but oral history places it about three miles east of Rincon Stage Station.

In the late 19th century, a stagecoach was traveling through Myrtletown in Humboldt County. According to legend, the stagecoach was carrying $125,000 in gold bullion. It was ambushed by a gang of outlaws who claimed the cargo for themselves. The thieves are believed to have buried the treasure in Myrtletown. Burying stolen goods in the same town you stole them in is incredibly ill-advised. If the outlaws in question did indeed bury the stolen gold bullion in Myrtletown and failed to adequately separate themselves from the scene of the crime, then it's very likely the law caught up with them before they reclaimed it.

There are hundreds of ghost towns in California. Many started life as mining towns only to be abandoned when the gold rush subsided. Other towns became hubs of trade and culture but were destroyed by flash flooding and/or earthquakes. Today, the remains of these towns are popular among urban explorers and treasure hunters alike. You'll find some of California's most promising ghost towns for metal detecting examined below. 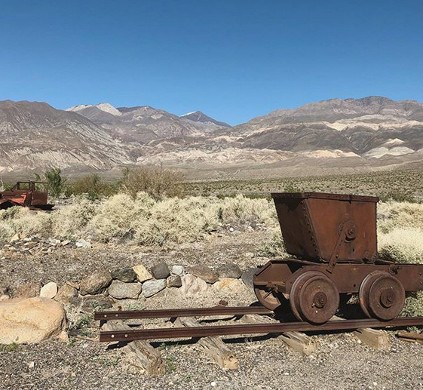 The town of Ballarat in Inyo County was never going to be a long-term settlement. When it was founded in 1897, the town did not have many amenities. Its earliest settlers even had to have water imported from elsewhere in California.

To their credit, the founders of Ballarat briefly turned it into a prosperous mining town. By the end of the 19th century, the town boasted 500 residents and had three hotels, seven saloons, a school, and a jail. Ballarat's demise began with the closure of its mine in 1903 and a mass exodus soon followed. By 1920, the town was virtually abandoned.

Ballarat found itself in the headlines in the 1960s when Charles Manson and the infamous Manson Family moved into a ranch in the town. To this day, the mining shacks of Ballarat are covered in graffiti courtesy of Manson and his murderous devotees. Many treasure hunters have even reported finding suspected Manson relics in the town.

North Bloomfield differs from many of California's ghost towns in that it's almost perfectly preserved. The town was founded shortly after gold was discovered on the San Juan Ridge in 1851. Scores of prospectors headed to the town hoping to capture some gold of their own. Initially, most were unsuccessful. Made bitter by their failure, they named the town "Humbug".

Conditions improved in the area following the introduction of hydraulic mining. Gold could now be extracted from the town at a rapid pace and its population ballooned. In honor of Humbug's newfound prosperity, residents renamed it "North Bloomfield" and set about building saloons, breweries, churches, and schools.

Unsurprisingly, the banning of hydraulic mining in 1884 had a devastating impact on North Bloomfield. Prospectors and small business owners alike abandoned the town in droves. By the turn of the century, it was just another ghost town. Today, the remains of North Bloomfield lie within the Malakoff Diggins State Historic Park. Many of its buildings have been preserved in their original state, while others have been restored or entirely reconstructed.

The passing of Colonel Allensworth in 1914 had a devastating effect on his creation. Without the Colonel to guide them, many of the town's residents became disillusioned. Some left to fight in World War I, while others perished as a consequence of the area's extreme drought.

The remains of Allensworth were turned into a state park in 1974. Today, history buffs visit what's left of the town, hoping to see life through the eyes of its earliest settlers. It has also been the site of a number of paranormal investigations, with some claiming to have witnessed the spirits of young children playing in its streets.

In California, there is a significant amount of gold still waiting to be discovered. This known gold is complimented by the region's many stories of buried treasure. Together, they make California one of the best states in America for prospecting and treasure hunting. Even a complete novice can expect some encouraging success while either metal detecting or panning for gold in California.