How to Tell If a 5 Dollar Bill Is Real

If you sell merchandise for cash then it's important that you know how to verify a five dollar bill. In this article we'll go over counterfeit money detectors and also how to use the eye test.

The easiest way to find out if a bill is real or not is to use a counterfeit money detector. These products will automatically tell if you have a real bill or a fake.

Counterfeit detector pens are the most affordable money detector products. These small devices retail for less than 10 dollars. But don't let the price deceive you, these pens are effective and many people swear by them.

There are more advanced money detectors that scan the entire bill. Most of these money detectors retail for around $10-100. If you run a business then it may be wise to invest in one of these products.

Note that most of these products are not always 100% accurate. This is why it's also recommended that you use the eye test in addition to using a money detector.

When doing the eye test, you'll need to verify that the bill looks authentic and that all the security features are present. The verification process is quick and simple once you know what to look for. 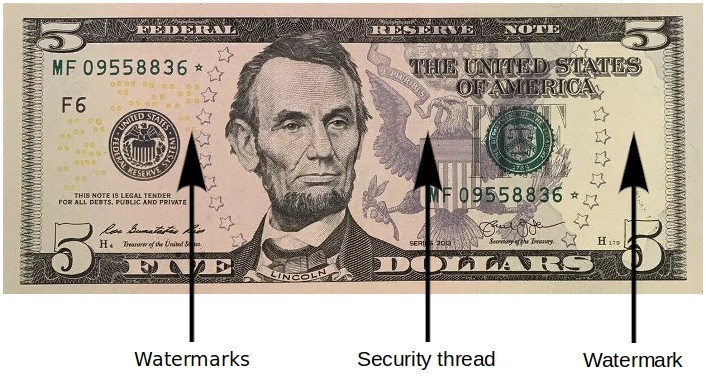 Watermarks can be found in two different locations. When you hold the bill up at an angle, you should see a large numeral 5 on the right side of the bill where the clear section is. Also to the left of Lincoln's portrait there are three smaller numeral 5s shown vertically. The watermarks were first added to the $5 bill in 1999.

On the obverse side of the bill, the motto E PLURIBUS UNUM can be found at the top of the shield within the Great Seal. The abbreviation USA is found in between the columns of the shield. The words FIVE DOLLARS can be seen inside the bill's vertical borders.

On the reverse side of the bill, the words USA FIVE can be seen on the lower part of the purple numeral 5.

If you use a counterfeit money detector and/or use the eye test, then you should be able to accurately determine whether or not your bill is real. We recommend buying a money detector to give you more peace of mind. If you own a business then a money detector could save you a lot of money over time.