Gold was first discovered in Wisconsin towards the end of the 19th century. Numerous discoveries were made but they were never sizeable enough to warrant commercial mining. Today, prospecting in Wisconsin is strictly recreational. On occasion it can be fun and rewarding to prospect here in The Badger State.

Type of Gold Found in Wisconsin

Most of Wisconsin's gold drifted down from Alberta, Canada. The Canadian glaciers often crushed the gold into tiny fragments during migration. As a result, gold in the state is usually flour or placer.

It has been said that lode gold lies beneath Wisconsin soil. However, there is little evidence to confirm this. Even if it were true, it's likely that the gold would be low quality. It would be so contaminated that a prospector would probably lose money extracting it.

Because it's not widely practiced in the state, Wisconsin's prospecting laws aren't particularly strict. Gold panning here does not require a mining permit.

Wisconsin's earliest prospectors generally preferred sluice boxes to gold pans. This was likely because a sluice box is more effective in capturing the small pieces of gold that are common in the state. Today, a permit is not required for using small sluice boxes.

The use of motorized equipment is more heavily regulated and requires permission from the Wisconsin Department of Natural Resources.

Flour gold flows through most of Wisconsin's rivers. Of course, dedicated prospectors are rarely happy with such small pieces of gold. If you want a chance of capturing placer gold, then read the section below for a list of some of the richest rivers and streams in The Badger State. 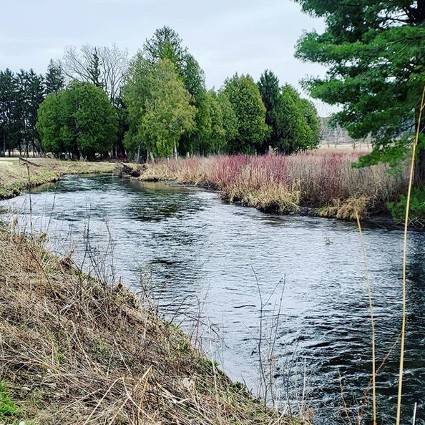 Black Earth Creek runs through the town of Cross Plains in Dane County. It's a Class 1 trout stream that attracts fishing fanatics from all over Wisconsin. Some people even travel from neighboring states to fly-fish in the creek. But Black Earth Creek is also an increasingly popular spot among Wisconsin prospectors. Many prospectors have reported extracting placer gold from its waters. Even fishermen has reported inadvertently finding gold in the creek on occasion.

The black sand beaches of Lake Superior are one of the most consistently rewarding prospecting spots in all of Wisconsin. Running through Douglas County, Lake Superior is the largest of the Great Lakes of North America. It should then come as no surprise that this lake boasts more placer gold than most other bodies of water in Wisconsin. Flour gold has also been reported in Lake Superior. So even if you don't capture placer gold, it's unlikely that you'll leave empty-handed.

Much like Lake Superior, Plum Creek has proven itself to be a regular producer of placer gold. Plum Creek is located in Pierce County, where some of the state's earliest gold discoveries took place. Between 1887 and 1890, Plum Creek was particularly fruitful. During this period, prospectors reported some of the most significant finds in Wisconsin's history. It's worth noting that many of these discoveries were made using a sluice box. While panning Plum Creek certainly isn't futile, you should consider using a sluice box for greater success.

When Plum Creek was at its most productive, prospectors were reporting similar success at Rock Elm Creek. This isn't all that surprising given the close proximity of the two creeks. Rock Elm Creek is also located in Pierce County.

The Poplar River is decent option, but it's generally not as good the other spots mentioned above. This river runs through Douglas County, where it's panned by locals with varying degrees of success.

It's not worth going out of your way to prospect in Wisconsin. At the very least, you should put Wisconsin on the back burner until you've prospected states more noted for gold production. Nearby Michigan will give you a slightly better chance at success.

But if you're a native of Wisconsin then we encourage getting out there and panning its waters. While you'll likely have to leave the Midwest to find any significant gold, the placer gold of your home state makes it a good place to develop your prospecting skills.