Trade dollars were minted from 1873-1885 and these coins have numismatic value. Keep to reading to learn more about these silver coins. 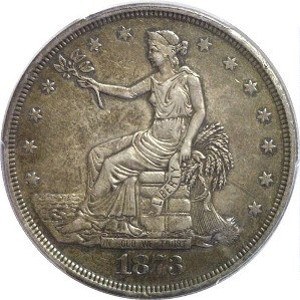 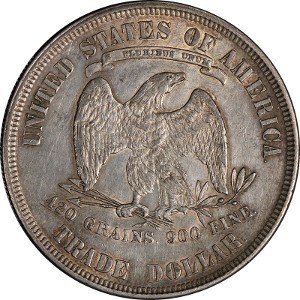 The trade dollar was made for circulation in Asia. It was made in order to compete with other dollar coins from different countries. Many of the coins that circulated throughout Asia have Oriental markings on them, referred to as chop marks. Trade dollars were legal tender in the United States.

In the year 1887, the United States repealed the law authorizing trade dollars. The Treasury then redeemed dollars that were unmutilated.

Proof coins with no mint mark were minted during select years and these coins will sell for more money.

Any trade dollar is worth at least its weight in silver. The silver melt value for each coin is $17.59 as of February 05, 2023. This scrap value is calculated from the current silver spot price of $22.34 per ounce.

Trade dollars in the better condition grades will sell for more money. Uncirculated coins and proof coins will sell for higher prices. In addition, several notable error varieties exist and these error coins can be quite valuable.

Ultimately, the value of a trade dollar will depend on its series and its condition. See the list below to learn the value for some of the trade dollars that we have featured on our website.