Most Ronald Reagan dollar coins aren't rare or valuable. However these coins in uncirculated condition can sell for a premium. Keep reading to learn more about these coins. 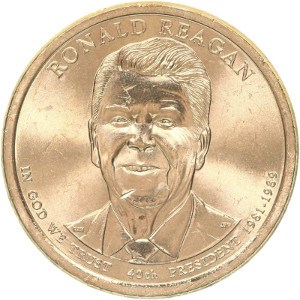 Ronald Reagan was the 40th president of the United States of America. The date range 1981-1989 inscribed on the coin signifies his time in office.

The reverse proof Ronald Reagan dollar coin is a special edition coin that has a brilliant mirror-like appearance. You could only buy this coin as part of the 2016 Ronald Reagan Coin and Chronicles Set. This set also included a 2016 W silver eagle proof coin and a bronze medal.

The 2016 S proof Ronald Reagan dollar coin is worth around $6 in PR 65 condition.

The 2016 S reverse proof Ronald Reagan dollar coin is worth around $80 in PR 65 condition.