The James Garfield dollar coins aren't rare or valuable. However these coins in uncirculated condition can sell for a premium. Keep reading to learn more about these coins. 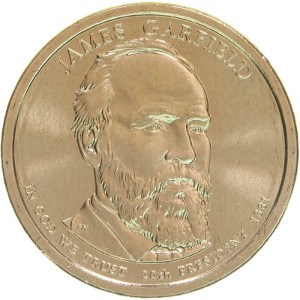 James Garfield was the 20th president of the United States of America. The date 1881 inscribed on the coin signifies the year he entered office. Garfield was assassinated six and a half months into his first term.

The 2011 S proof James Garfield dollar coin is worth around $8 in PR 65 condition.

Click here to search for James Garfield dollars on Amazon.