The Franklin D. Roosevelt dollar coins aren't rare or valuable. However these coins in uncirculated condition can sell for a premium. Keep reading to learn more about these coins. 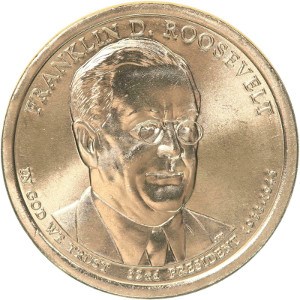 Franklin D. Roosevelt, nicknamed FDR, was the 32nd president of the United States of America. The date range 1933-1945 inscribed on the coin signifies his time in office. He was the only president to serve more than two terms.

The 2014 S proof Franklin D. Roosevelt dollar coin is worth around $7 in PR 65 condition.