The standard 2015 Saratoga quarters are made of a clad composition that contains copper and nickel. Clad proof quarters and silver proof quarters were also minted and they sell for more money. Keep reading to learn more about these coins. 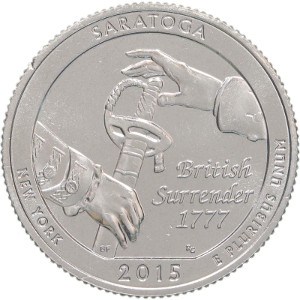 On the reverse side of the coin the design shows British General John Burgoyne surrendering his sword to American General Horatio Gates. The British forces were defeated at the Battles of Saratoga in 1777. The inscription on the coin reads "British Surrender 1777".

Saratoga National Historical Park is located in New York and it preserves the site of the Battles of Saratoga.

This coin is worth at least its weight in silver. The silver melt value for this coin is $4.24 as of February 01, 2023. This melt value is calculated from the current silver spot price of $23.46 per ounce.

Click here to search for 2015 Saratoga quarters on Amazon.