The 2015 March of Dimes silver dollars have value as numismatic coins. Keep reading to learn more about these silver commemorative coins. 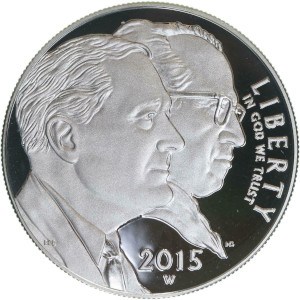 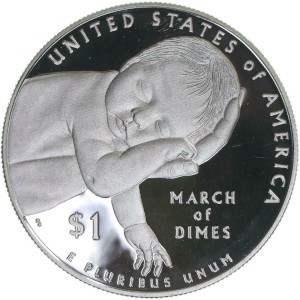 These coins were minted in order to commemorate the 75th anniversary of the March of Dimes foundation. Also known as the National Foundation for Infantile Paralysis, March of Dimes is an organization that aims to improve the health of infants and their mothers. This foundation was created by Franklin D. Roosevelt at a time when the polio disease was becoming more prevalent. Roosevelt once battled polio himself.

This coin in circulated condition is worth at least its weight in silver. The silver melt value for this coin is $18.79 as of January 23, 2022. This melt value is calculated from the current silver spot price of $24.29 per ounce.

The 2015 P March of Dimes silver dollar is worth around $50 in mint packaging.

The 2015 W proof March of Dimes silver dollar is worth around $40 in mint packaging.