2009 was a special year for pennies. For this year there are four different design varieties on the reverse side of the coin. These designs commemorate both the 100th anniversary of the Lincoln penny and also the bicentennial of Abraham Lincoln's birth. Keep reading to learn more about these one cent coins and what their value is. 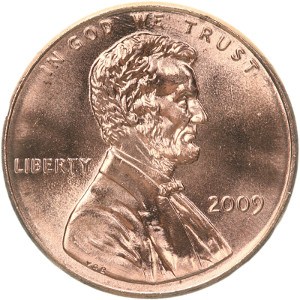 The US minted the 2009 penny with no mint mark and also the 2009 D penny and 2009 S proof penny. The mint mark, when present, can be found on the obverse side of the coin below the date.

In addition to the standard pennies and copper proof pennies, the mint sold special-edition copper pennies with a satin finish as part of a set. These collectible copper pennies were not issued for circulation so you won't find them in your spare change. 2009 copper pennies weigh 3.11 grams, the same weight as the old copper Lincoln pennies that were issued from 1909-1982. 2009 zinc pennies weigh 2.5 grams.

As mentioned there are four different design varieties on the reverse side of the coin. The designs show the four stages of Abraham Lincoln's life. The phrase "E PLURIBUS UNUM" is inscribed on each design. This Latin phrase means "One out of many".

Each design has a similar mintage and no one design is more valuable than another. 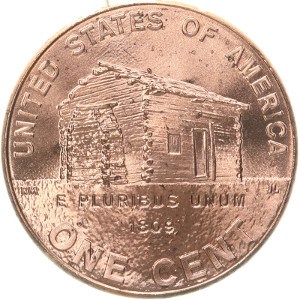 On the reverse side of the coin there is an image of a log cabin which is similar to the one that Lincoln's parents lived in. It's believed that Lincoln himself was born in his parent's log cabin. The date 1809 is inscribed on the coin and this date signifies the year that Lincoln was born. 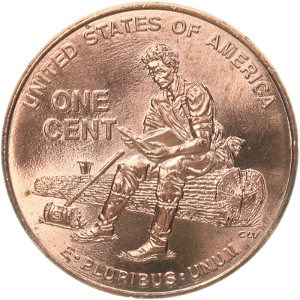 On the reverse side of the coin there is an image of a young Abraham Lincoln sitting on a log. In this image Lincoln is reading a book while taking a break from splitting logs. Lincoln once worked as a rail splitter. 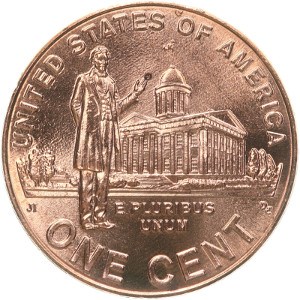 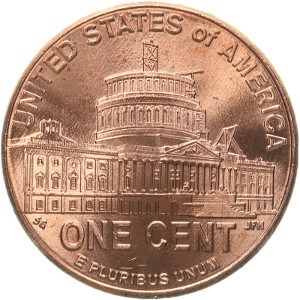 On the reverse side of the coin there is an image of the U.S. Capitol Dome the way it looked when Lincoln held office. The U.S. Capitol Dome was partially completed at the time, and this image symbolizes how the nation was during that time period- torn apart by slavery and the U.S. Civil War.

The 2009 zinc pennies are each worth around $0.50 in uncirculated condition with an MS 65 grade.

The 2009 copper pennies with the satin finish are each worth around $10 in uncirculated condition with an MS 65 grade.