The standard 2009 American Samoa US territory quarters are made of a clad composition that contains copper and nickel. Clad proof quarters and silver proof quarters were also minted and they sell for more money. Keep reading to learn more about these coins. 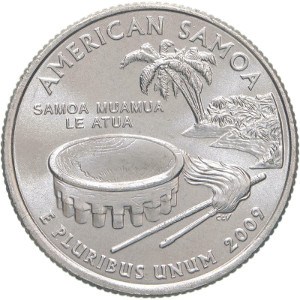 American Samoa is a group of five islands and two atolls located in the South Pacific Ocean. This territory is about 2,300 miles southwest of Hawaii. American Samoa became an official US territory in 1929.

On the reverse side of the coin there are several different images that include a shoreline with a coconut tree and ceremonial items. The ceremonial items include the ava bowl, whisk, and staff. The ava bowl is used for a ceremonial drink during special occasions. The whisk and staff symbolize the rank of orator who gives speeches during gatherings.

There is also an inscription in the local language that reads "SAMOA MUAMUA LE ATUA". This translates to "Samoa, God is First".