The standard 2008 Arizona state quarters are made of a clad composition that contains copper and nickel. Clad proof quarters and silver proof quarters were also minted and they sell for more money. Keep reading to learn more about these coins. 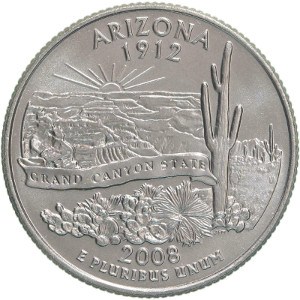 On the reverse side of the coin there is a design that features two different images: the Grand Canyon and a desert landscape with cacti. The state's motto "The Grand Canyon State" is also shown. The Grand Canyon is the top tourist attraction in Arizona and it attracts a few million tourists each year. It's classified as one of the seven natural wonders of the world.

The year 1912 is inscribed on the coin because this was the year that Arizona officially joined the union.

The standard 2008 Arizona clad quarters in circulated condition are only worth their face value of $0.25. These coins only sell for a premium in the higher condition grades.

This coin is worth at least its weight in silver. The silver melt value for this coin is $4.62 as of January 27, 2021. This melt value is calculated from the current silver spot price of $25.57 per ounce.

The 2008 S silver proof Arizona quarter is worth around $8 in PR 65 condition.