The standard 2006 Nebraska state quarters are made of a clad composition that contains copper and nickel. Clad proof quarters and silver proof quarters were also minted and they sell for more money. Keep reading to learn more about these coins. 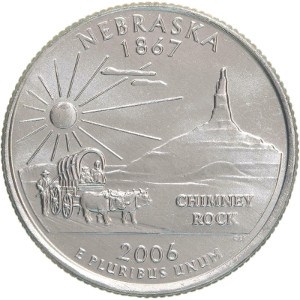 On the reverse side of the coin there is an image of Chimney Rock and an ox-drawn wagon filled with pioneers. Chimney Rock is a unique rock formation located in Western Nebraska. This rock was a landmark for early pioneers who traveled through the Oregon trail, Mormon trail, and California trail. Early pioneers are a big part of Nebraska's history.

The year 1867 is inscribed on the coin because this was the year that Nebraska officially joined the union.