The 2004 Lewis and Clark bicentennial silver dollars have value as numismatic coins. Keep reading to learn more about these silver commemorative coins. 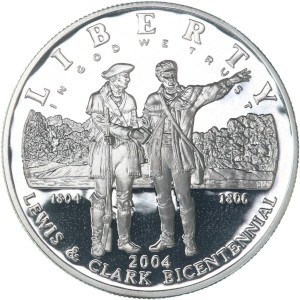 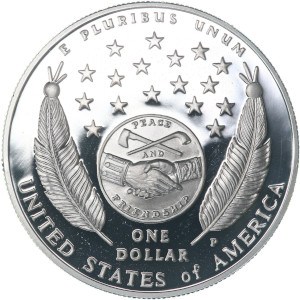 These coins were minted in order to commemorate the bicentennial of Lewis and Clark's expedition into the western part of the United States. The goal of their expedition was to explore the new lands that were acquired through the Louisiana Purchase and to establish trade relations with the Native American tribes.

The obverse side of the coin features explorers Meriwether Lewis and William Clark discussing their expedition at a stream bank. The dates 1804 and 1804 are inscribed on the coin. These dates signify the beginning and end of the expedition.

On the reverse side of the coin the design features the original Jefferson Peace Medal which was given to Native Americans tribal leaders on behalf of President Thomas Jefferson. There are two feathers next to the medal which represent the Native American cultures that were impacted by the expedition. The 17 stars shown on the coin represent the number of states in the Union back in 1804.

This coin in circulated condition is worth at least its weight in silver. The silver melt value for this coin is $17.62 as of December 02, 2022. This melt value is calculated from the current silver spot price of $22.78 per ounce.

The 2004 P Lewis and Clark bicentennial silver dollar is worth around $30 in mint packaging.

The 2004 P proof Lewis and Clark bicentennial silver dollar is worth around $32 in mint packaging.

Click here to search for 2004 Lewis and Clark silver dollars on Amazon.