The standard 1965 quarters are made of a clad composition that contains copper and nickel. The standard quarters are not valuable, however rare silver error coins can be found. Keep reading to learn more about these coins. 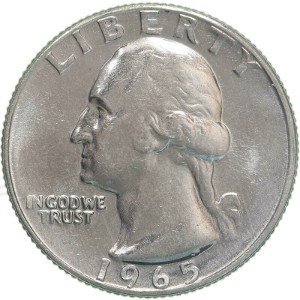 Note: None of the 1965 quarters have mint marks.

1965 was the year that dimes and quarters changed from being 90% silver to 0% silver. So 1965 was known as a transition year because the mint had to change their operations. Errors get made whenever there is a big change in operating procedure.

It's possible that more 1965 silver error quarters are in existence. But how would you identify one? It's simple. The easiest method is to weigh the coin on a calibrated gram scale. The standard clad quarters weigh 5.67 grams and the 90% silver quarters weigh 6.25 grams. You can also use the eye test. Silver quarters are shinier and they don't have any copper or nickel layers showing on the edge of the coin.

Most of the 1965 quarters you find are common and not worth more than then their face value. However you should still be on the lookout for the 1965 silver quarter which can sell for thousands of dollars.