The 1964 Kennedy Half dollars have value as both numismatic coins and as silver bullion. Keep reading to learn more about these silver coins. 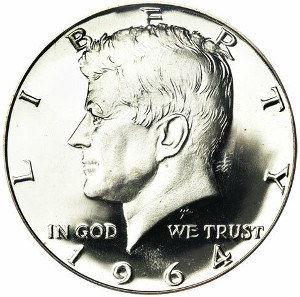 The US minted the 1964 half dollar with no mint mark and also the 1964 D half dollar. The mint mark, when present, can be found on the reverse side of the coin.

The Kennedy half dollars were minted in order to memorialize the late president John F. Kennedy. Congress authorized the minting of this coin about a month after Kennedy's tragic assassination. Production of these coins started in January 1964 and right away they became popular with collectors.

This coin in circulated condition is worth at least its weight in silver. The silver melt value for this coin is $8.11 as of February 09, 2023. This melt value is calculated from the current silver spot price of $22.41 per ounce.

The value of these coins isn't all that high because most of them were hoarded by collectors after they were released to the public. It was also rare to see them in circulation, so most coins for sale will be in uncirculated condition.

Proof coins with no mint mark are available and they are each valued at around $25 in PR 65 condition. There were 3,950,762 proof coins minted.

There is an accented hair variety for the proof version of this coin. The design was changed in order to make Kennedy's hair more detailed. There were other small changes made besides the hair but they are harder to notice. One theory as to why the design changed was because Jacqueline Kennedy wanted more detail in her late husband's hair.

Only about 1-3% of all proof coins have the accented hair so therefore these coins are more rare and more valuable. In PR 65 condition the value is around $100.

MS 60 uncirculated- There are no signs of wear. The coin has luster, but there may be a few stains, abrasions, or surface marks.