What Is a Dish Ring?

Dish rings are used to hold hot dishes on a table. These silver items were introduced in order to avoid damage from having a hot item stand directly on a table. Dish rings remained on the table throughout the entire meal and they held dishes such as potato bowls, soup bowls, dessert bowls, and sometimes punch bowls. In Ireland dish rings were also called potato rings because potato bowls were commonly placed onto the silver stand. 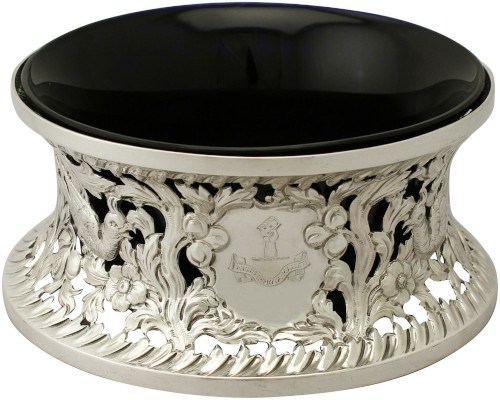 The earliest example of a dish ring dates back to 1704. However it's thought that some models have existed a few years prior. These early dish rings were made of silver. Dish rings first became used in Ireland around 1750 and they remained a popular table piece until the end of the 19th century. Irish dish rings were circular, where as English models were sometimes oval shaped.

The early dish rings were very shallow and the sides were less than three inches long. The diameter at the rim was normally equal to the diameter of the base. The sides were ornamented with scrolls and flowers. Many designs featured farm and pastoral scenes. European hunting scenes were another popular design. In addition, there were some designs that had Chinese figures.

Antique silver dish rings are rare and they can sell for thousands of dollars. Dish rings with elaborate designs are more sought after by collectors. The later designs did not have as much detail.