Argyles are small vessels used for gravy. They were first introduced around 1780. Argyles were supposedly named after John Campbell, the fifth Duke of Argyll. It's said that Campbell got tired of his gravy being served cold and thus Argyles were created in order to fix this problem. 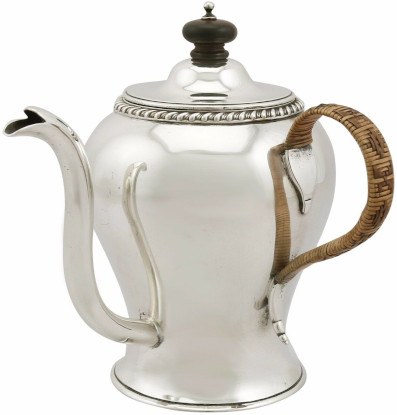 Styles changed over the years as heating methods improved. The earliest argyles were essentially gravy boats with spouts fitted on either side in order to hold a piece of hot iron that kept the gravy hot. This style was improved upon when a double-interior wall was introduced in order to hold boiling water. Another variation was produced which had a bulbous body and a small foot that served as a compartment for the hot water. This made more space for the gravy.

In addition to being used for gravy, a lot of early argyles were used as coffee and tea pots.

Argyles are rare items and not many of them were made. This means that they can be quite valuable. Antique silver argyles can sell for thousands of dollars.