Wisconsin is a great state for rockhounding. Rockhounds from all over the Midwest visit the state each year in the hopes of uncovering some of its distinctive gems and minerals.

Rockhounding in Wisconsin is governed by many of the same laws which govern the activity across America.

Rockhounding is permitted on most public sites across Wisconsin. However, the activity may be off limits in certain areas. Most notably, rock collecting is forbidden in Wisconsin state parks. This restriction is in place to protect the state's ecosystem. Rockhounding is also not permitted at state wild rivers or state forests. The public sites that do permit rockhounding ask visitors to stick to a strict collection limit of 25 pounds per day.

Many novice rockhounds mistakenly assume that the summer months are the best time to indulge in the hobby. While it's true that there are periods of summer which offer favorable conditions for a rockhounding adventure, there are also periods that present just the opposite. Summer temperatures in Wisconsin can be over 90 degrees Fahrenheit. In such heat, an extended rockhounding session is difficult. Additionally, the summer months see tourists descend upon Wisconsin in larger numbers. This makes it more difficult to find a spot where you can hunt for rocks without other people present.

Many Wisconsin rockhounding veterans agree that early fall is the best time for rockhounding in the state. Throughout September, the weather remains warm and dry while presenting little risk of sunburn or dehydration. Furthermore, most tourists have returned home by this point. This allows rockhounds to search without crowds.

The Lake Superior shoreline is Wisconsin is home to some of the finest agates in the United States. Many of these agates are thought to have formed a staggering 20 million years ago. An agate from Lake Superior would make a great addition to any rock collection.

One of the great advantages of Lake Superior is that it can be accessed via a number of Wisconsin towns and cities. Its shoreline runs through Superior, Washburn, Bayfield, and more. It's also accessible through a number of other states, including Minnesota and Michigan. This makes Lake Superior a popular choice among rockhounds all across the Midwestern states. 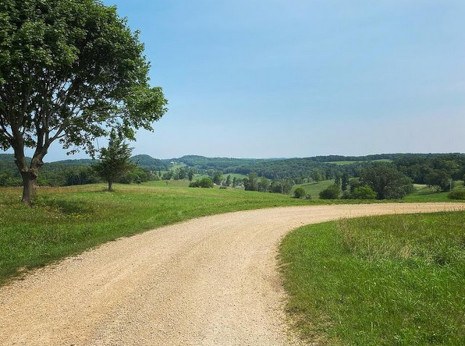 For the most ambitious of Wisconsin rock collectors, a trip to Iowa County is a must. The county is home to several fruitful towns and cities. These include South Amana, Williamsburg, and Marengo. They have all been the site of notable gem and mineral discoveries. The discoveries possible in Iowa County extend far beyond agates, jasper, and granite.

In 2010, Iowa County became famous for the Mifflin meteorite. The fireball crashed into the southwest region of Wisconsin on April 14th, 2010. This event immediately made the news, and it brought a lot of attention to Wisconsin rockhounding. Some rock collectors took to the internet to purchase fragments of the meteorite. Other collectors packed up their rockhounding equipment and headed to Iowa County, intending to find parts of the Mifflin meteorite with their own hands.

To this day, rockhounds continue to venture to Iowa County to search for fragments of the meteorite. Some of them are successful, while others are not. There really isn't any telling where you might uncover a piece of the Mifflin meteorite in Iowa County. But most rockhounds agree that there are fragments of that most precious rock still waiting to be uncovered and added to your collection.

Quarry Lake Park is located in the city of Racine. The city itself has been the scene of some notable rock discoveries over the years. Among the most commonly reported gems and minerals in Racine are agates, granite, and sandstone. It's also possible to uncover small fossils if you focus your hunt on the area surrounding North Beach.

For the highest chances of rockhounding success in Racine, you should visit Quarry Lake Park. As its name suggests, this is an abandoned quarry that is now a popular destination for rockhounds and treasure hunters alike. Limestone is plentiful in Quarry Lake Park. Large quantities of it can be found by even the most inexperienced rockhounds.

It's important to note that quarries can be dangerous sites. If you are visiting Quarry Lake Park, then take the proper precautions- stay alert, and make sure somebody knows where you are going.

Wiscosin is one of the best states in the country for rockhounding. The one criticism we could make of Wisconsin as a rockhounding destination is that it doesn't have many commercial collecting sites. Such sites are great for newcomers and often guarantee them their first notable finds. In the state's defense, however, it's home to a number of locations that can be just as productive as a typical commercial site. Take Racine, for example. Gems and minerals can be found throughout the city, oftentimes just resting on its sidewalks.

If you're an experienced rockhound then a trip to Wisconsin can sharpen your skills. In particular, Iowa County presents a formidable challenge with the possibility of an invaluable reward in the form a Mifflin meteorite fragment.