Panning for Gold in Ohio

The first reports of gold in Ohio emerged in the late 1800s. The frequency of early gold discoveries spawned several commercial mining operations in the state. Ultimately, all of these projects ended in failure. While Ohio is not a viable location for commercial prospecting, modern hobbyists often report success in the state. Flour and placer gold can be extracted here in the Buckeye State.

Types of Gold in Ohio

Ohio's gold was pushed down from Canada by glaciers during the last ice age. These glaciers grounded the gold down while in motion, and this accounts for the small size of most gold in Ohio.

Flour and placer gold may not fill you with much excitement at first. However, it's important to remember that an estimated two-thirds of Ohio was once covered in glaciers. This means significant quantities of fine gold are likely waiting to be captured by prospectors in the state. When collected in large amounts, even specks of flour can have monetary value. 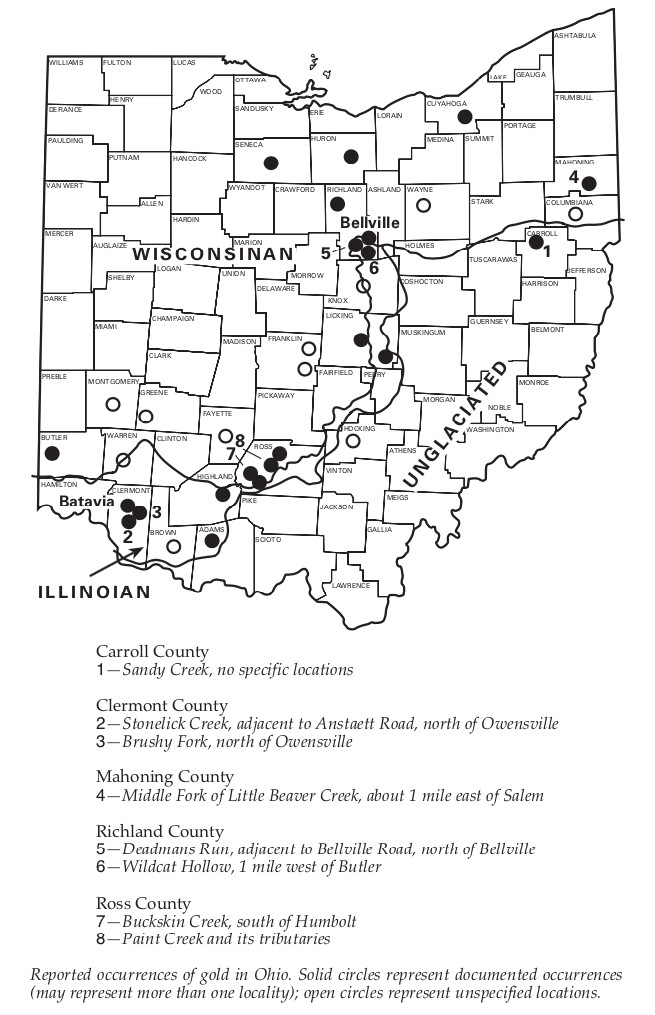 It's illegal to pan in the Ohio state forests. But on any other public land in Ohio, hobbyists are free to pan without issue as long as their impact on the surrounding environment is minimal. There are are no clear laws on sluicing, but using a small sluice box should not get you in trouble.

It's recommended that you consult the Federal Bureau of Land Management for the location of active mining claims in Ohio. This will help you avoid trespassing on private property.

Wayne National Forest, the only national forest in the state, is generally safe for recreational prospecting but you need a permit to use a sluice box or suction dredge.

In the section below, we'll examine some of the most promising areas for gold panning in Ohio. We'll begin by looking at the state's gold-producing counties before moving on to specific rivers and streams.

The following four counties have reported finding gold in their respective districts.

Clermont County is one of the highest producers of gold in Ohio. As a result, it's home to some of the most popular prospecting locations in the state. Placer gold has been found around Stonelick Township. Discoveries have also been made near Perintown.

Located in the Appalachian region of Ohio, Ross County is home to about 70,000 people. Although prospecting didn't play a major role in the county's development, gold has been panned throughout its history. Most of Ross County's gold is fine placer. For this reason, many local prospectors choose to use a sluice box instead of a pan. The most notable gold discoveries in Ross County have occurred in the town of Chillicothe.

Flour gold has been extracted from Richland County rivers on a number of occasions. Placer gold has also been reported, but with less frequency. Some Richland County prospectors have been known to shun traditional methods of finding gold. Instead, they use metal detectors to identify gold caught between rocks and buried beneath the soil.

There are several rivers and creeks in Morgan County where gold has been reported. With a population of just 15,000, Morgan County is the fourth least populous county in Ohio. This actually makes the area quite alluring to prospectors. Because so few people call Morgan County home, it has been panned less than many other regions in Ohio. It's possible that significant quantities of gold flow undisturbed through its waters.

The following four rivers and streams are where gold has been found in the past.

Leatherwood Creek is a tributary of Wills Creek. Some local prospectors insist that gold flows through all of the creek's 28.6 miles. The river rises in the Barnesville area of Belmont County. It runs through Noble County and Guernsey County before joining Wills Creek in the town of Cambridge. Although Leatherwood Creek can be difficult to access in certain areas, gold has been discovered in almost all of the towns it flows through.

Seneca County is not nearly as rich as some other counties in Ohio. However, it's home to at least one noted producer of gold. Seneca County's Honey Creek has been producing small but consistent gold since it was first panned in the 19th century. It also runs through Miami County where you will find the Honey Creek Preserve, a popular hiking location. Those who wish to pan Honey Creek have a better chance of success hunting in Seneca County.

Ohio and other regional states such as Indiana don't attract a lot of out-of-state prospectors. Most novices wisely chose to hone their gold panning skills in states where gold is in greater abundance. Meanwhile, more experienced prospectors scoff at the lack of lode gold in Ohio.

While visiting Ohio exclusively for prospecting isn't recommended, we do encourage panning its waters if you live in the state. While prospecting in Ohio will not make you rich, its rivers contain enough gold to keep you satisfied.