America's Pacific Northwest is a great place to go metal detecting. States throughout the region boast fruitful soil and relaxed laws. Oregon is perhaps the best example of this.

Oregon's history is extensive. Indigenous tribes have called its land home for thousands of years. As such, Native American artifacts are not hard to find by using a quality metal detector. In addition, settlers first began arriving on Oregon's shores in the 1500s. They left behind relics which are still being unearthed today.

In this article, we'll review the best spots for metal detecting in Oregon. We'll also the review the rules and regulations to ensure that you stay within the law at all times.

As mentioned above, Oregon's metal detecting laws are fairly relaxed. However, that doesn't mean you can disregard them. You must always be mindful of what authorities expect from you.

Metal detecting in Oregon is regulated by the Archeological Resources Protection Act. The ARPA is a federal law regulating metal detecting all across America. Its aim is to preserve items of historical and cultural significance. This law prohibits the removal of man-made objects more than 100 years of age from public ground.

Metal detecting is permitted in Oregon State Parks and on the state's ocean shores. There are a few exceptions, but you're unlikely to encounter them. The official state website actually features an extensive list of locations where you are free to use a metal detector without a permit. If a site isn't included on the list, then that doesn't necessarily mean it is off limits to treasure hunters. It may simply be that a permit is required to use a metal detector on its grounds.

The use of motorized equipment is forbidden for hobbyist treasure hunters. Similarly, you are only permitted to use small tools when digging. Any hole you make must be filled in before you leave the site. If you find that vegetation is stopping you from reaching an artifact, then you must find a harmless way around it. Cutting vegetation is strictly forbidden by Oregon metal detecting law.

Like most other states, Oregon requires treasure hunters to turn over any items of historical importance they find. This is generally taken to mean items that could be 100 years or older. Similarly, any item that has clearly been recently lost, such as a new watch or ring, should be handed over to authorities.

Oregon's shores and waters are approved for metal detecting. However, shipwrecks are considered to be archaeological sites and so they cannot be touched.

Oregon's park's are a popular destination for treasure hunters. This is because most of the state's parks don't require a permit for metal detecting. 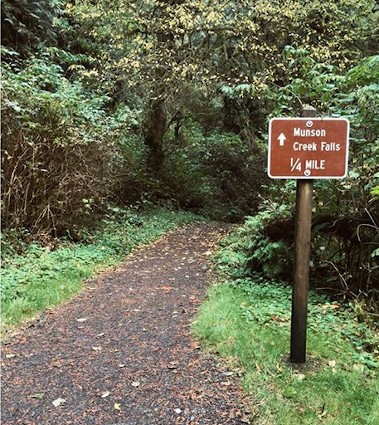 Munson Creek Falls is a state park that encompasses the waterfall from which it takes its name. The park also includes many square miles of rich earth from which numerous valuable relics have been removed. In all likelihood, countless more artifacts from Native Americans and European settlers alike remain to be found here.

Jessie M. Honeyman Memorial State Park is the second-largest state park in all of Oregon. As such, it boasts plenty of room for metal detecting. Without obtaining a permit, you are free to explore the park in search of forgotten treasure.

Just like the parks mentioned above, Prineville Reservoir State Park is a great place to search. Located right in the center of Oregon, it's one of the most popular metal detecting sites in the state. Thankfully, its soil is immensely rich. This means that even with the countless treasure hunters who regularly visit the park, you still have a good shot at unearthing something valuable. Discoveries have even been reported in the Prineville Reservoir parking lot!

Any one of Oregon's beaches is a great place to go metal detecting. Below are two of the more notable beaches.

Cobble Beach is located in the city of Newport. As its name suggests, there isn't a whole lot of sand at this beach. The shore is mainly made up of rocks and small stones. Nevertheless, a number of interesting finds have been made here. Because it doesn't fit the bill of a traditional beach, Cobble Beach isn't a big hit with tourists. This means you'll be able to find a quiet part of the beach to focus on your metal detecting. 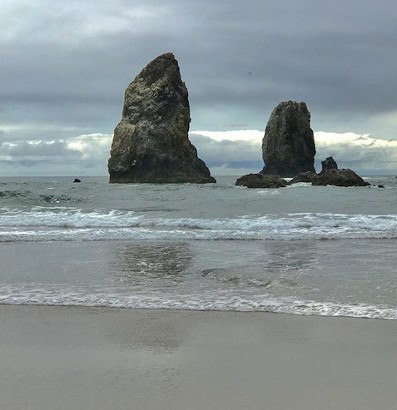 For a more traditional beach, visit Cannon Beach. This beach also doubles as a city, but it takes its name from its sandy shore. During low tide, the sands of Cannon Beach are particularly fruitful. Over the years, treasure hunters have reported finding rings, watches, and more during low tide.

There are ghost towns scattered throughout Oregon. Most of them are easily accessible and offer ample opportunities for treasure hunting. 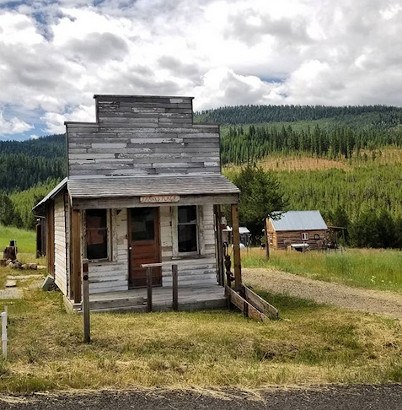 Granite was founded during one of several 19th-century gold rushes. Today, it lies virtually abandoned. Artifacts from its glory days can be found lying around the town. Even more artifacts can be found beneath its soil. Using a metal detector, you can expect to unearth tools, jewelry, and other items left behind by Granite's former residents.

Hardman is an interesting case in that it still has a population of two dozen people or so. Nevertheless, it very much feels like a ghost town. Abandoned buildings lie decaying in abundance. Old farming tools rest forgotten against trees. Relics from hundreds of years ago sit just beneath its paths, waiting to be discovered.

Be mindful of Hardman's residents when metal detecting here. Try to keep noise to a minimum and be sure to clean up after yourself.

Buncom holds the distinction of being Oregon's best-preserved ghost town. As you walk into the town, you'll feel as though you've stepped through a time machine. Mining relics dating back more than 150 years can be unearthed here. However it's important to remember that this town is overseen by the Buncom Historical Society. We suggest contacting them before your visit to secure permission to use your metal detector.

If you're a fan of Native American history, then Oregon is the state for you. Relics from ancient tribes are regularly discovered in the state and they are particularly common in state parks.

If you're hoping to find something from a later time in American history, then Oregon's beaches or ghost towns are a good place to look. With a quality metal detector in hand, an Oregon treasure hunter can piece together a physical timeline of American history.