Georgia is a state rich in history. The 16th century brought with it the arrival of European explorers. When they left in the early 1700s they were replaced by British settlers, who made the state one of the original 13 colonies. These settlers gave Georgia its name, branding it in honor of King George II.

Not long after America gained its independence, Georgia succeeded from the Union. It became the site of several civil war battles, relics of which can still be found in its soil. Remnants of its 1829 gold rush also lie waiting to be discovered. And amidst all this documented history, there are legends of buried treasure throughout the Peach State!

Metal detecting in Georgia is regulated by the Archeological Resources Protection Act. The ARPA is a federal law and has long been a cause of frustration for treasure hunters in all 50 states. It's designed to protect items of historical significance. However, its definition of 'historical significance' casts a broad net. Under the ARPA, a man-made item may not be extracted from federal land if it's more than 100 years old.

If you do find somebody willing to let you metal detect on their property then it's best to get their permission in writing. This written permission should also be accompanied by some sort of agreement as to how discoveries will be divided.

Relics from the Battle of Chickamauga and additional Civil War battles can be found throughout Georgia. They come in the form of medallions, belt buckles, and buttons. It's important to remember that metal detecting on Civil War battlefields is forbidden. Thankfully, much of the land used by Confederate and Union soldiers on their way to war is now private property. Evidence of their presence lies in the soil of many private Georgian fields and farms.

Georgia has many tales of buried treasure. Admittedly, most of these tales appear to be nothing more than fiction. But there are a few stories which seem plausible and have inspired metal detecting throughout the state.

From the 16th century to the 18th century, French explorers frequented Georgia. The vast majority left the area upon the arrival of the British. However, a small number seem to have remained in the state right up to the end of the 1700s. It's alleged that these people buried 2,700 pounds of pure silver in Georgia before finally leaving. The exact location of their bounty isn't known, but most place it near the forks of Mule and Okapilco creeks.

During the Civil War, it was not uncommon for those living in Confederate states to bury their most valuable possessions. This was done to ensure that their possessions didn't fall into the hands of the Union soldiers. It's believed that one Confederate supporter buried more than $100,000 in gold in Cobb County for this very reason. The exact location of the gold is unkown. However, some sources claim that it lies just 300 yards northeast of the Nashville, St. Louis, and Chattanooga railroad tracks.

Jefferson Davis may have also buried treasure in Georgia. This man was the President of the Confederate States of America throughout the Civil War. Like his supporters, he is known to have buried his riches to keep them out of Union hands. It's believed that Davis buried upwards of $10 million in gold bullion in Washington, Wilkes County when it became clear that the war was lost.

The Georgia Gold Rush began in 1829. This means it predates the legendary California Gold Rush by two decades. From 1829 into the 1840s, prospectors came from all over America to try gold prospecting in Georgia. This led to the establishing of mining towns across Georgia. Today, most of these mining towns lie abandoned. The ghost town of Auraria is of particular interest to treasure hunters.

Auraria takes its name from the Latin word "aurum", meaning gold. The town was settled in 1832 by prospector William Dean. Initially, Dean was its only resident, but by the end of 1832, Auraria boasted a population in the hundreds. Over the course of the next few years, Auraria grew to include almost two-dozen stores, hundreds of homes, and a series of government buildings. A number of gold mines were also established, including the Hedwig-Chicago Mine and the Gold Hill Mine.

As Georgia's gold fever subsided, so did the gold production of Auraria. With its gold mines nowhere near as active as they once were, Auraria was sold to a buyer who pretty much forced an evacuation of the town. The few prospectors who hadn't already left for California were forced to flee their homes and start a new life elsewhere. Today, the town of Auraria is empty. 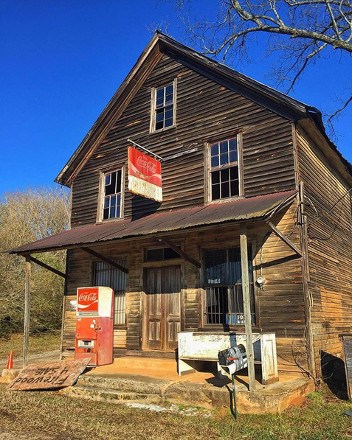 It's Georgia's Civil War and gold rush history that makes the state so popular among treasure hunters. Its long-abandoned mining towns are prefect for urban exploration and metal detecting. Furthermore, much of the land crossed by Civil War soldiers on their way to battle is now private property. This makes Georgia one of the few states where treasure hunters are free to extract Civil War relics without fear of violating the ARPA.