Do you have any old pennies on hand? If so then you could have some copper pennies. The pre-1982 pennies are 95% copper. Because of their copper content, these coins are worth about twice their face value. The modern pennies after the year 1982 are 97.5% zinc and only 2.5% copper.

Copper pennies are getting harder to find as people are searching their change and storing the pre-1982 pennies. Learn more about these coins below.

Is Your Penny Copper or Zinc?

Copper and zinc pennies can look roughly the same. It can be hard to tell because the Lincoln Memorial Design has both copper and zinc coins.

The easiest way to tell the difference is to check the date. However there are a few different tests you can do.

1982 was the year that the US government switched the one cent coins from copper to zinc. So both versions were made in 1982, but it's easy to tell the difference with a few basic tests.

If you have a gram scale that is accurate to at least .1 gram then this is an easy test. Just put your coin on the scale and see what the weight is. Copper pennies weigh 3.11 grams and zinc pennies weigh 2.5 grams.

Remember that this test won't work if your scale is only accurate to 1 gram. For example, a scale with 1 gram increments would round down the copper weight to 3 grams and round up the zinc weight to 3 grams.

For this test you will need a hard surface such as a granite countertop, as well as a genuine copper penny and a genuine zinc penny. Take each coin and drop it on the hard surface and listen to the sound that it makes. Copper has a more high pitched 'ring' sound, where as zinc has a flat 'click' sound. Try it out for yourself. Once you can clearly tell the difference then you can start sorting your coins.

The weight test is a lot more accurate than the sound test. We only recommend doing the sound test if you don't have a gram scale.

There are several different types of copper pennies that you may encounter. We will detail them below.

The Lincoln Memorial design is common and recognizable. It has Abraham Lincoln on the front and the Lincoln Memorial on the back. This design was minted from the years 1959-2008. However the copper Lincoln memorial coins will be from 1959-1981, with some copper coins minted in 1982. 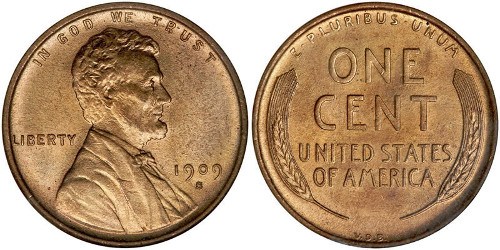 Lincoln wheat cents are easy to spot, you can check the date and see the 'wheat design' on the back of the coin. They were made from 1909-1958. In 1959 the government changed over to the Lincoln Memorial design.

Their composition is slightly different than the more common Lincoln memorial cents. In addition to copper, wheat cents also contain a small amount of tin- about 1% or less of the total metal content.

These coins have more numismatic value, and are therefore more valuable than the Lincoln Memorial copper cents. In today's market they go for around 3-5 cents each and some are worth more depending on their condition.

Indian Head cents were made from 1859-1909. You're not going to find these coins in your lose change. However you may be able to find them in old boxes or from family heirloom chests.

There were pennies made before the Indian Head cent. They include the Braided Hair cent, the Coronet, and the Classic Head among others. Most of these cents were large- about the size of the current US dollar coin. The earlier copper pennies before 1859 are very rare, and you most likely won't find them around your house. Although it is possible to find them in family heirloom chests.

Can You Melt Copper Pennies?

Theoretically it would make sense to melt down non-numismatic copper pennies for their copper value. However the United States government has made it illegal to melt down any US coin. In 2006 they passed a law, Section 331 of Title 18, which bans this practice. So it's not worth the risk of getting caught. Melting coins is also illegal in the UK, as referenced in the UK coinage act 1971.

Keep in mind though that laws can change. Some copper coin hoarders are waiting for this law to change so they can melt down all of their copper pennies. It's also wise to hold onto your copper pennies because like other precious metals, they are a good hedge against inflation.

Where to Find Copper Pennies

Finding copper pennies is not difficult. All you need to do is find pennies dated before 1982. You can look in your house and see what types of coins you can find in your drawers, coin jars, etc.

You can also find copper pennies in your change. Whenever you make a cash purchase and receive back coins, you can check to see if there are any copper pennies. Most of the time you won't find any, but it can be fun to check.

Another option is to go coin roll hunting at your local bank. A roll of 50 pennies is worth 50 cents, so you could sift through a lot of rolls if you wanted to.

Where to Buy Copper Pennies

Click here to search for copper penny rolls on Amazon.

If you plan to buy bullion then it's important to check the latest price of copper. That way you can compare the precious metal value to the actual cost of the copper coins.

Rare copper pennies can also be found at the large online bullion retailers such as Apmex.

Where to Sell Copper Pennies

It's important to note that older copper pennies will sell for higher prices because they have numismatic (collectible) value. So therefore it's best to separate your wheat pennies and early series pennies in order to sell them separately. The Lincoln Memorial series pennies don't have much numismatic value.

Copper pennies are nice coins to store and they are not difficult to find. So take a look for pennies made before 1982 the next time you dig through your coin jar or receive change.