Most 1995 one dollar bills are not rare or valuable. Therefore most of these bills will not be worth much more than face value. However there are star note varieties and web note varieties which are more valuable than the standard notes. Continue reading to learn more about these bills.

Star notes are replacement bills that the United States Federal Reserve printed. These star notes are more rare and thus more valuable. You can tell if you have a star note by looking to see if there is a star symbol at the end of the serial number.

Most 1995 series $1 star notes are worth around $6 in uncirculated condition with an MS 63 grade.

Star notes issued from the Federal Reserve Bank of Dallas are much more valuable. Each bill is worth around $12.50 in very fine condition. Uncirculated bills with a grade of MS 63 can sell for around $25.

Web notes are bills that were printed on a web-fed press. The web-fed press method allowed printing on continuous rolls of currency paper, similar to the way newspapers are printed. The government tried out this printing method for a few select years before abandoning it. Web-fed press notes are more rare and thus more valuable.

The easiest way to identify a web note is to look for a small number to the right of the "IN GOD WE TRUST" motto. See the image below for reference. 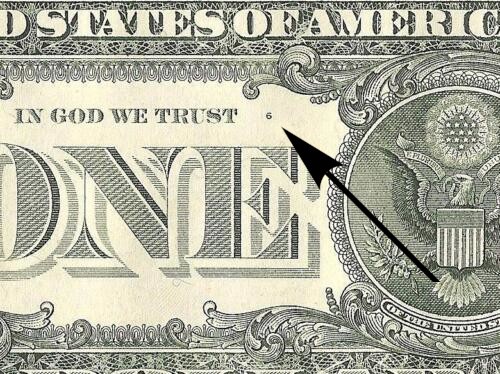 Very fine- A note that has been in circulation but not for a long time. The note is still relatively crisp. There may be some creases, folds, or light smudges.

MS 63 choice uncirculated- A note that shows no signs of ever having been in circulation. The note still has its original crispness. The note is also well-centered.