Where to Find Gold in the USA

During the 1800s, millions of Americans came down with "gold fever". While success alluded most individual prospectors, some found the gold they were searching for. For example George Hearst made millions through a series of commercial mining projects across America. Although modern prospectors are unlikely to duplicate Hearst's success, gold can still be found in most states.

Below we'll review each region of the United States and which states are the best in each region.

The Western region presents the most opportunities to find gold in the United States. California is the best Western state for novice prospectors. Commercial prospecting centers, such as Matelot Gulch Mining Company, are located throughout the state and provide panning lessons for new prospectors. There are also several different rivers in the state where you can pan on your own.

Commercial panning centers can also be found in Oregon. Located along the Rogue River, Hellgate Recreation Area provides lessons to panners of all levels. Those who prefer to pan independently should check out the Sixes River and Sharps Creek.

In Colorado, gold is often reported in Cache Creek. History buffs should also visit Phoenix Gold Mine. Tours of the mine are available, as are beginner's panning lessons.

If you're serious about gold prospecting then you can try finding gold in Alaska. The prospecting conditions are difficult in Alaska, but it's one of the most fruitful states in the country.

Most other states in the West also have gold. These states include Washington State, Utah, Montana, Wyoming, and Idaho. 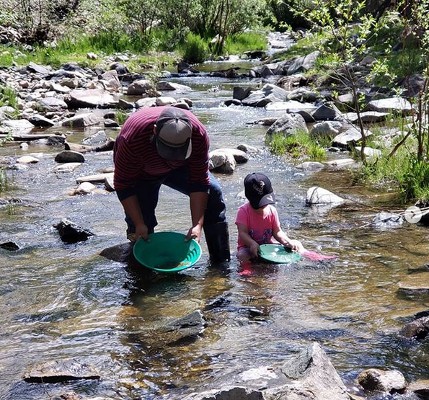 Most of the gold in the Midwest drifted down to the region from Canada during the last Ice Age. In Indiana, glacial gold can be found in Monroe County. Prospectors in Monroe County often report finding gold in Sycamore, Indian, and Gold creeks. Brown and Warren counties are also home to a number of gold-bearing streams.

South Dakota is a consistent producer of placer gold. Custer County is the most popular prospecting spot in the state, with the area around French Creek being particularly fruitful.

During the last Ice Age, much of Ohio and Michigan were covered by glaciers. This means gold can be found in some areas of these states.

You can find a small amount of gold in Wisconsin and Minnesota. But it's not worth going out of your way to prospect in these less-promising states.

Gold in Virginia is concentrated along the Virginia Gold-Pyrite Belt. Located within the belt are Orange County, Cumberland County, and Buckingham County. All three counties have proven to be consistent producers of gold. Fairfax and Culpeper counties have also been the sites of significant discoveries over the years.

The Carolina Slate Belt runs through both North Carolina and South Carolina, with small stretches in Virginia and Georgia. This belt has been the site of hundreds of commercial mining operations. Some mines remain active along the belt, and recreational prospectors continue to report success. There's also gold in Tennessee but it's not the best state in the South for prospecting.

Texas is the biggest state in the South but it doesn't have much gold. There is some gold in Northern Texas and the best way to capture it is with a drywasher or sluice box.

Although it's the largest state in the Northeast, New York is rarely visited by prospectors. This is because of New York's uncommon law that any gold found in the state is government property.

Northeastern prospectors should focus most of their attention on New England. New Hampshire has ample opportunity for recreational prospecting. Gold-bearing rivers run throughout the state, including the Swift River, which is notable for its gold nuggets. Placer gold can also be found in the Swift River, as well as in the Baker River, the Sandy River, and the Connecticut River.

Vermont boasts some of the purest gold in America. Most US gold is somewhere between 18 to 20 karats. By contrast, gold in Vermont has been known to reach as high as 23.5 karats. Many panners have reported success along the shores of the Ottauquechee and Mad rivers.

In addition, there's gold in Maine which makes it a decent prospecting location.

Recreational prospectors generally stick to using traditional gold pans. However, pans are often ineffective in regions with fine gold. If you're prospecting in somewhere like New England, where gold is quite small, then a sluice box is a better option. Many states allow the use of a hand sluice box without a permit. But a motorized model may require a permit, depending on the state.

Prospecting in dry states such as Arizona or New Mexico can require special equipment. In these desert-like environments, it's usually best to use a gold metal detector and/or a drywasher. A gold cube is another tool worth considering.

While "gold fever" is no longer at epidemic levels, most American states still contain some gold. The states mentioned above contain gold and they are the most popular states among prospectors.

Some states are more suited to certain skill levels than others. California, with its many recreational panning centers, is a great place for a novice to get started. Veteran prospectors who want to challenge themselves could focus on states with more taxing environments, such as Alaska.